✕
Save
Is Religious Architecture Still Relevant?
Share
Or
Copy

It is interesting to note that there is no fundamental or essential form for worship spaces in most major religions. Although we think of minarets for Islam and Gothic cathedrals for Catholicism, throughout history many sacred spaces were easily switched from one religion to another depending on those in power. For example, the Pantheon was stripped of its sculptures of Pagan gods and replaced with Christian imagery while the architecture itself stayed the same and played the same role. Buildings erected on Biblical sites have changed from churches to mosques to synagogues. Built sacred spaces, no matter the religion, often share very similar typologies, with the use of light and scale to evoke a sense of awe and piety.

However, historical architecture has very rarely built spaces with the purpose to house multiple religions. An exception is the Golden Temple in Amritsar (1577), where entrances on all four sides represent the temple's willingness to open its doors for people from all walks of life and religions. But the historic desire to clearly separate the architecture of different faiths is changing, with the Temple of All Religions in Russia (1992) tackling the architectural problem by juxtaposing Greek Orthodox domes with Russian minarets and ornamental flourishes that would be at home in a Jewish synagogue or Islamic mosque. And currently being built in Berlin is the House of One (2015), where a church, synagogue, and mosque will exist under the same roof.

Another interesting way this issue has been explored is through "multifaith" rooms that exist in airports, shopping centers, hospitals, prisons, schools, and government buildings. These multifaith rooms, often invisible if one does not look for them, are typically simply an empty, white-walled room tucked in somewhere without any input by architects, where people of different faiths can come in to worship while waiting for a plane or a discharged patient. Andrew Crompton, Head of the School of Architecture at the University of Liverpool, explores the phenomenon of multifaith spaces and describes them as “mundane spaces without an aura,” explaining that “in order not to be meaningful in an inappropriate way, they use banal materials, avoid order and regularity, and are the architectural equivalent of ambient noise.” [1] Rather than attempting to promote unity through inclusion, using the Temple of All Religions' approach of a strange eclectic mix of everything, these multifaith rooms attempt to promote unity by stripping away anything that evokes the sacred, leaving us with nothing.

But are "spiritual" or "multifaith" spaces even relevant in a time where rates of religiosity are declining rapidly? In fact, they may be more important than ever. Julio Bermudez’s collection of essays, Transcending Architecture: Contemporary Views on Sacred Space describes how “our contemporary civilization has exacerbated the feelings of existential emptiness and meaninglessness” and that the need for "spiritual" or "transcendent" space could not be more relevant. [2] With consumerism and hyper-connectivity, where we are continually besieged by constant images, noise, and information, the need for spaces to reflect, to meditate and to feel silence is crucial. In this way, spirituality in architecture can be completely disconnected from organized religion and take on a new role—with architecture that creates a sense of wonder, a space for reflection, and a glimpse into clarity.

The ways to create these architectural conditions can be learned from the structures of the past, to recreate the atmosphere of self-reflection and awe without the necessity of religion. Through form, space, scale, materiality, and light, the role of spiritual spaces can begin to form a new typology, one that today’s society can benefit from. Louis Kahn believed that spiritual spaces could be created through silence and light, evidenced in his projects such as the Salk Institute, where a program of religious worship was not essential to the creation of a sacred place. He described his use of light and dark in his architectural work as pertaining to the philosophy that “even a space intended to be dark should have just enough light from some mysterious opening to tell us how dark it really is.” [3] In the Salk Institute, the stark difference between the shadowy cloisters beneath the laboratories and the open brightness of the plaza emphasizes the qualities of light in each of those spaces, heightening the sense of drama and emotion. In Robert McCarter’s tome on Louis Kahn, he describes that although this plaza does not have a formal program, it “remains one of the most powerful and deeply moving spaces ever built.” [4]

Another way in which architects have tackled the question of how to create spiritual spaces is through the use of nature. The dappled shadows cast by the branches of an ancient tree, or the way the ocean laps gently against the shore, are all moments in nature that create a sense of tranquillity, working to uplift the human spirit. In the Salk Institute and Carlo Scarpa’s Brion Cemetery, the use of water flowing through the site acts as a moment of calm, its precision and simplicity creating a brief moment of absolute clarity. In Peter Zumthor’s Therme Vals water is an essential part of the program and, paired with the materiality of the quartz stone walls, it creates a surreal and meditative space. These examples give a hint to how these new spiritual spaces can be built, where the emphasis moves from specific religions to a space for all that is necessary for all.

Our ongoing architectural fascination with cathedrals, mosques, and temples points to the continuing relevance of religious architecture. Although we may not all follow the traditions and beliefs of organized religion, the effects that these buildings create suggests a new type of architecture that can be relevant and even essential in our current world. 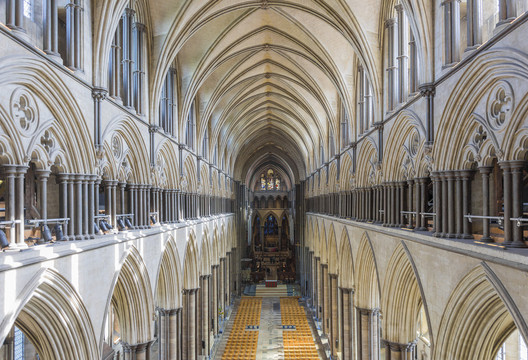