Heinle, Wischer und Partner's design for a triangular shaped building has been awarded first place in a competition to design the Małopolska Science Center in Krakow, Poland. The competition brief, which called for a design which would be both iconic and innovative, was responded with a proposal by the team that creates a new landmark for the Malopolska region of Poland.

Read about their winning design after the break.

The aim of the design of the science center is to be a simple, yet expressive building. Its triangular form is partially buried in the ground with the slope descending from north to south, until it meets the ground plane. This allows the roof to become an occupiable space and serves not only as a landscaped area, which has been called the “Garden of the Senses,” but also as an observation deck for flight demonstrations and other events which frequently occur on the abandoned aircraft runway near the site. 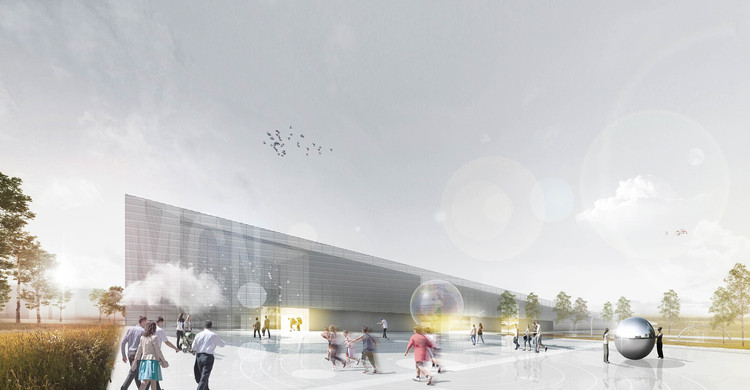 The building is divided into four main sections which serve as areas for conferences, a main entrance, an exhibition space, and ancillary rooms which house laboratories and spaces for workshops. Each area has variability in its floor layouts as well as in the heights of the rooms, which allows visitors to meander through the spaces.

Heinle, Wischer und Partner's scheme also features innovative sustainable design solutions including a heating and cooling system which uses geothermal energy and using native plant species in the roof garden to limit the occurrence of heat islands and to improve the microclimate near the building.