American artist Janet Echelman's latest sculpture is currently on display at Madrid's Plaza Mayor. Titled "1.78 Madrid," the piece is the latest of Echelman's suspended thread sculptures, and the newest piece in her Earth Time Series begun in 2010. On display until February 19th, the piece was unveiled on Friday to mark Madrid's 400th anniversary. 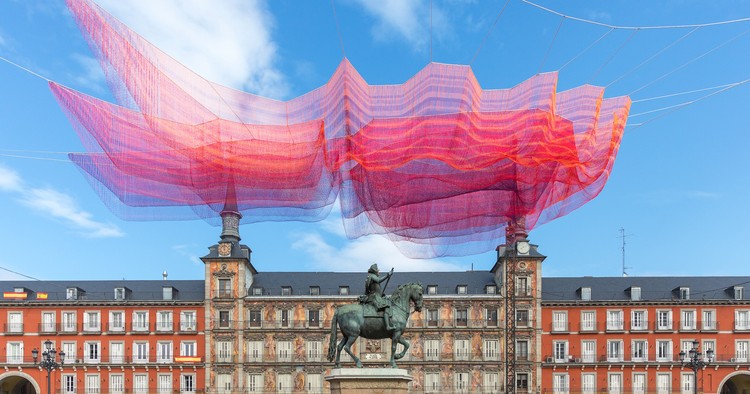 Hanging above the plaza's statue of King Philip III of Spain, the piece explores the idea of time, and our interconnectedness with the physical systems which influence our relationship with time itself. The number 1.78 in the artwork's title refers to 1.78 microseconds, the amount of time that a day on Earth was shortened as a result of the 2011 Earthquake in Japan.

“In the last four hundred years, people have gathered at Plaza Mayor to witness bull-fights and Spanish Inquisition burnings,” said Echelman. “Today we gather together with art that explores our concept of time, to discuss ideas. This is a hopeful trajectory for humanity.”

The sculpture is formed from very strong, highly engineered fibers in vibrant colors which are braided, knotted, and spliced together to form a lightweight net that reacts to the movement of the wind. At night, colored lights are projected onto the piece to add to its vibrancy. 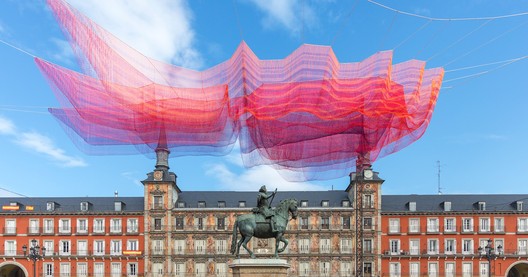