The protective fortress, winding cobblestone streets, and medieval urban layout are all characteristics of many coastal European towns. But when exploring the French town of Saint-Malo, it is difficult to believe that this is hardly the original city. What separates Saint-Malo from many other European towns located by the sea—aside from its striking location jutting out from the coastline—is the complex history of how it was heavily destroyed in World War II, but rebuilt to its original aesthetic. 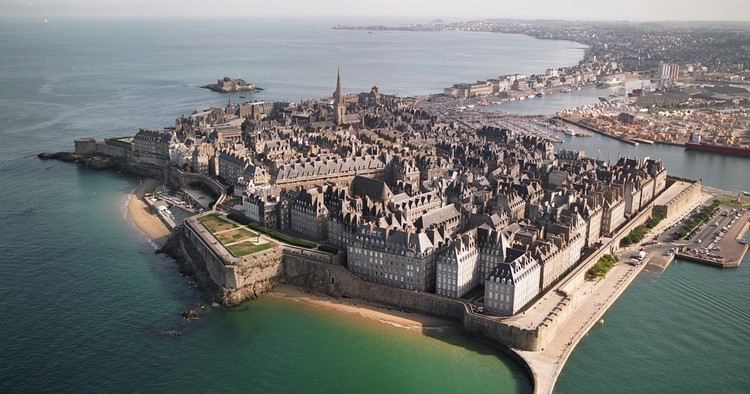 Saint-Malo was founded in the 1st century BC, a short distance south of its current location in Brittany, in northwestern France. The first settlement, in what is now St-Servan, was built by Celtic tribesmen in order to control the entrance to the Rance River for economic and military purposes. After the fall of the Roman Empire, a new settlement that would eventually become the walled town of modern-day St Malo was created by monks fleeing the British Isles.

In 1144, the bishop Jean de Châtillon gave the town of Saint-Malo the status of rights of asylum which encouraged all manner of thieves and rogues to move there, making it the ideal home to the French Corsairs, or The King of France’s appointed pirates. The Corsairs grew their wealth by pillaging foreign ships in the English Channel, even traveling as far as Plymouth on the English coast. As Saint-Malo’s wealth began to grow, the city's limits expanded, bridging from the island to the mainland. However, the walled coastline continued to play a key role in defining Saint-Malo's place in the world for centuries to come.

In 1940, Nazis invaded the city of Saint-Malo and occupied it as part of the Atlantic Wall. Although by the end of the war less than 100 troops and two anti-aircraft installations remained, the Allies believed the Axis powers had major armaments built up within the city walls. As a result, Saint-Malo was severely bombed by the Allies in 1944, and was almost completely destroyed by the American shelling and British naval gunfire. 80% of the city was lost.

Over the 12-year span from 1948-1960, the city was rebuilt brick by brick by the determined Malouins. However, instead of attempting to modernize the style of architecture in Saint-Malo, it was restored to its original glory, maintaining its medieval character.

Those in charge of its reconstruction planned it to be close to the original, with a few modifications. While the castle was replicated and transformed into the city hall, the hospital and prison were relocated outside of the city walls. Mansions were rebuilt with identical granite facades and only a handful of half-timbered homes from the 1600s were retained. In contrast to other cities that were rebuilt after the war, such as Warsaw and Dresden, there are no obvious signs of modern construction.

Saint-Malo seems to be the perfect case study to examine a time when European cities were developed around Medieval transit systems, when walkability was necessary, and when the wealthiest lived in the urban core. Today, during Saint-Malo's peak tourist season, the city accommodates more than 200,000 people. At approximately 57 people/acre, this is more dense than the average densities of both Tokyo (25 people per acre) and Vancouver (22 people per acre), making it a fantastic example of how traditional urbanism can still be built and accommodate dense populations without the default of becoming a high-rise megacity.