Chilean architect Verónica Arcos has been invited to design a modular wood studio that was installed in the central courtyard of the Gabriela Mistral Cultural Center. The show was part of the Red Bull Radio Pop Up Santiago, a radio event that broadcasts eight hours a day of live conversation, musical selections and live shows in the search to spread what is now known as Chilean musical identity.

From the architects: The proposal consists of a pavilion that housed a radio and recording studio for the transmission of www.redbullradio.com during a week.

The geometry of the pavilion responds to both acoustic, diffusion and visibility requirements. It is a volume of 6 x 4m with its rounded corners. It has four double walls on its straight sides. On these are mounted the beams that structure the roof, which is flat.

Its interior walls have different degrees of roughness that absorb the sound avoiding the echo. One of the long walls has a pattern of horizontal lines in low relief showing the strata of the tertiary, the shorter wall has the logo of Red Bull also in low relief. And the most complex long wall consists of a rig made of wooden blocks, organized in a complex configuration that forms a geometric pattern. One of the exterior walls uses the same configuration. Both are retro illuminated, to generate games of lights and shadows, allowing to visualize the pavilion at a distance.

Wood is chosen because it is a material commonly used in Chilean architecture, specifically pine - the cheapest and most common local wood. At the same time, it has an optimal acoustic performance, which is why it is normally used in recording studios.

On the other hand, the form in plan, without edges responds to acoustic requirements, the curves in the corners of the pavilion avoid that the sound is encased.

The rustic appearance of the wood, in combination with a complex configuration, gives a contrast that brings into play local features, with a sophisticated geometry, working with a constructive system that responds to the acoustic requirements of the project, at the same time it has an ornamental character. 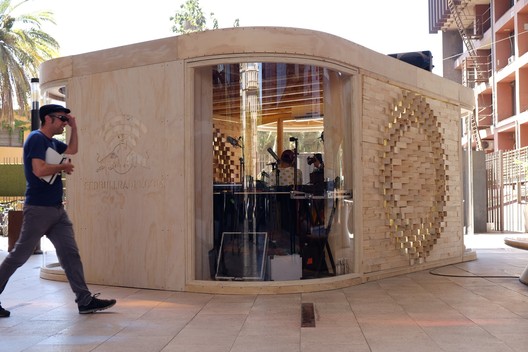