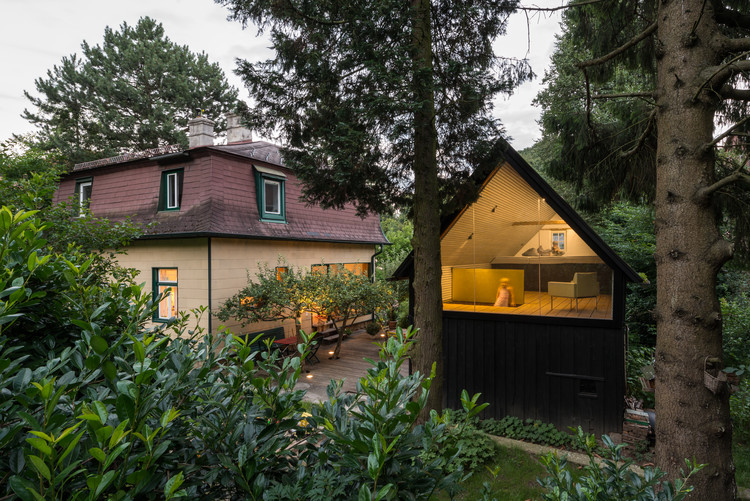 Text description provided by the architects. The special appeal of this project lies in the appreciation shown for this old outbuilding in the shadows of the Vienna Woods villas. Back in the 1930s, few people could afford a basement, let alone a garage. So they built their own sheds to store wood, raise rabbits or boil laundry.Over the past few decades, these structures have lost their original purpose, and many are falling apart. Converted into small, cozy ‘hideaways’, they become affordable, magical retreats for families and their guests. We inserted a large pane of glass into the front wall of the attic floor and carefully insulated the trusses. The walls were paneled with varnished grey fir, and an elevated section at the rear was upholstered so that the attic can also be used as a guest room. An elegant brass trapdoor closes off this enchanted place, from where you can watch the squirrels play in the treetops. The ground floor is still used for storing garden tools, the lawn mower, and fruit crates, while upstairs it is snug and comfortable.

Spotlights illuminate the brass in the evening, creating a warm light – even in freezing winter. The attic is ventilated via an already existing window and small air vents installed along the sides. After the war, this villa was the typical weekend house of a middle-class family in post-war Austria. We explained that the parlor and tiled stove were just ballast from the past and gently suggested that the house was somewhat overloaded with rustic kitsch. But where should one start with the ceiling construction? Where should the building show respect for the old, where must the new be radically introduced? Together with the clients, we felt that, from now on, other elements should shape the character of the building. For instance, the gnarled apple trees that blossom behind the house, the old terrazzo floors the color of black pudding, the slippery wooden floors and old double windows.

The first sketches showed new routes and visual axes through the orchard and idyllic places that no one had yet discovered. We gave the house a new open structure, a new spatial concept. We took only two radical steps: we had an external wall removed and replaced it with a generously sized but economical pane of glass. Out of three dark little rooms, we made a big, bright, loft-like space that now revealed a view of fruit trees and a magnolia, the pool from the 1950s, and the wooden shed treated with carbolineum. Now children play in small side rooms, the family lounges on an upholstered platform, the kitchen is both open and yet separate. The shed and the house are now connected by an apparently hovering larch deck that is like a kind of open living room from where you can look across the garden. Around the old apple trees, circles were cut out of the deck. When the children look out the spectacular window they see the tops of the fruit trees, illuminated from below at night.