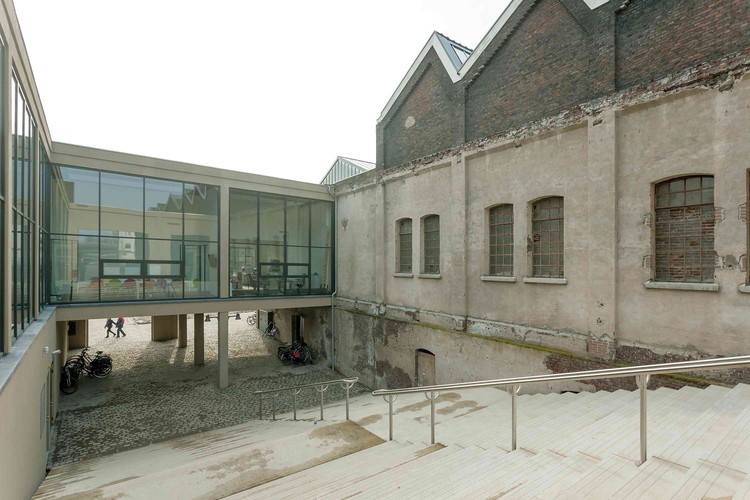 Text description provided by the architects. Commissioned by Maastricht City Council, JHK Architecten, working together with Verlaan & Bouwstra architecten, has transformed the former electric power station and boiler houses of the Sphinx factory in Maastricht. After extensive restoration and renovation, the listed power station has now become the new accommodation for the Maastricht cinema Lumière.

The complex consists of four buildings: the listed machine hall at the corner of the Bassin, two boiler houses directly behind and a carpentry workshop which links the machine hall to the other buildings in the culture cluster. The beautifully decorated listed machine hall now provides space for the cinema’s café/restaurant facility. The first floor, where the old steam machines used to be located, has been transformed into a stylish industrial restaurant in the middle of the old installations. On the ground floor, between the old masonry foundations of the steam machines, is the restaurant kitchen and a separate bar area directly connected to the terrace on the Bassin.

In the boiler houses behind are the six new cinemas, with a total capacity of 500 seats, stacked according to the box-within-a-box principle. The three largest have been installed in a half-submerged basement construction, which has left sufficient space in the halls to continue experiencing the iconic roof structures. This basement with the new cinemas represents an organizing intervention that together with a number of tactical breakthroughs of the various buidings has created a single, clear and surprising complex. The restaurant level, the elevated ground floor, continues above the half-submerged cinemas so that the four buildings could be linked with each other at this level. As a result, visitors to the cinemas can walk straight into the boiler houses from the restaurant and access one of the six cinemas from the elevated ground floor.

The three large cinemas are equipped with so-called ‘parabolic tiered seating’ which means that the seating at the back of the cinema rises up gradually. As a result, you have an excellent view of the screen from every seat, but you can also see the rows in front of and behind you which increases the feeling of a shared cinema experience. In addition, this special form of seating is reflected in the acoustic wall cladding by having the height of the panels correspond with the landings in the tiers of seating.

The entrance to the cinema is housed in the adjacent former carpentry workshop. There used to be an alley between the workshop and the power station which was later closed off. This closed gap can be clearly experienced internally because the old side wall of the power station can still be seen inside. This later filled-in zone forms the entrance to the cinema, from where people can ascend to the centre of the cinema via a new passage and a ‘lazy’ staircase.

Outside, beside the entrance, a public passageway has been made on the ground floor of the carpentry workshop, which links the inner courtyard of the building block, ‘the Cour’, to the Bassin. Above this passageway are the Lumière offices, and on the Cour side, where the street level connects to the first floor due to the large height difference, an extra multifunctional space has been situated.

The carpentry workshop is one of the earliest and most slender examples of a ‘Hennebique’ construction. This construction principle means that beams, floors and columns are all cast at the same time, so that extremely slender constructions could be realized. The construction of this building has been significantly reinforced, particularly under the intermediate floor, but the most slender columns on the upper floor can still be seen from the inside in the Cour wall, even after the repurposing.

The large cinema in the complex has been placed under the level of the Cour by making use of the great height difference between the Cour and the Bassin at the front of the power station. As a result, the desired future connection to the adjacent Sappi site directly behind the complex can be realized and there will also be room for future developments where the entire Cour will be enclosed.

The complex, which has been extended and rebuilt over the years, was full of abandoned technical areas, some of which had even been bricked up for years. By combining the basement construction, which fits into the complex like a machine, with clever routing it has been possible to give all these areas a new function, and most are now accessible to the public. Even the cinema toilets are worth a visit now because of this. Toilets were realized under the heavy masonry arches of a former railway line next to the power station, which was used to transport coal for the boilers. The toilet group next to the restaurant is however in a bright high-ceilinged space with beautiful light from above and classic green tiles, where the unit with the toilets and washstands are now free-standing in the space. The toilets for the cinemas are located in the former alley between the buildings. The former outside wall was left in full view here so that the history of the complex has been left visible for the observant visitor.

Since the complex consists of extremely diverse buildings, each with its own condition and status, every building was tackled in a different way, technically speaking. In order to be able to restore the heavily dilapidated boiler houses in a sound and durable way, the masonry, which was in a very bad state, was removed and the steel construction was preserved in its entirety. The walls were then rebricked and insulated, so that a much more comfortable and durable entity was created. By opting for this approach, the complex could be preserved in its entirety, including the slender steel constructions. At the same time, this approach made it possible to construct a basement under the existing buildings for the cinemas, which meant that space was left in the halls to experience the halls as a whole. The listed machine hall has been restored and renovated as well as possible. As a basis, the choice was made here to retain with improvements where possible, without changing the appearance of the monument too greatly.

As a whole, it is a magnificent complex, where the industrial heritage of the Sphinx has been combined with state-of-the-art cinemas and an extensive and welcoming restaurant in a wonderful atmosphere: a unique cinema at a unique location! 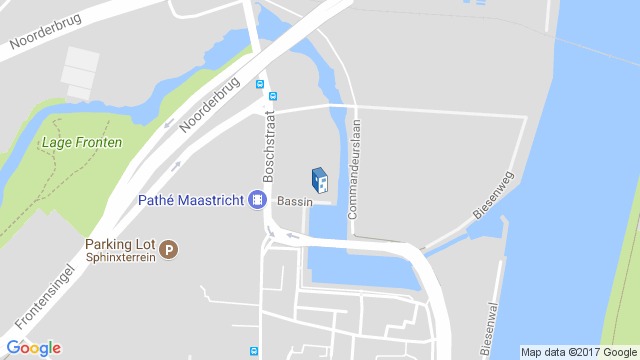