Text description provided by the architects. To what extent will the architecture of a house sought to become in a constant changing contemporary context?

Fast changing society put architecture at a point to which it has to change quickly to adapt to the demand of new functions or commercialization, and the frequency of changes is both ambiguous and persistent. If a place is defined just by the focus on values, to what extent will the house support the ambivalent reality of economic value and function, while retaining its core architectural one, which is nurture, stability, and permanence?

Witnessing the course of alterations, the architects behind the design are confronted with an open-ended question on how a house should grow, pondering on which part is the heart that will retain its core architectural intention, while the remaining chunk of the house will be free for modifications.

Commission to renovate a friend house, KIENTRUC O chose to fill in the context by subtracting the site with a void. The house is a seventy years old colonial villa that sits on one of the busiest roads in the heart of the city. The original house is a brick building that later expanded with an additional separate steel structure at the back of the house twenty years ago.

Confronted with the constant chaos of the city, the house juxtaposes against its urban context by introverting itself through spatial subtraction, creating a void that denotes its noisy context, only to remain a moment of internal monologue, poetic stillness, reflection, contemplation, and connection. Elliptical in geometry, the void carves along the horizontal side of the house toward the steel structure to the back, continuing upward to the roof forming the receding pattern of the floors above. The spatial abstraction of the void’s geometry is materialized.

Architecture has changed since commercialization. It does not just convey aesthetic as how it used to be, but more commercial construed, whose logic at some point in the future will expire, and it rather expires quickly. As the void sits in silence, denoted of distractions, it is the embodiment of the purity of emotion, triggering a sense of subtlety in the Vietnamese understanding of nature, despite the ambiguity of programmatic function. 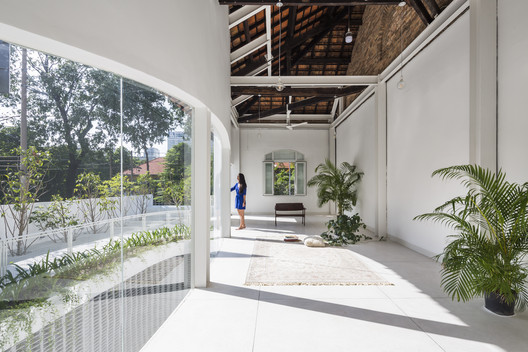