In December 2010, Manuel Peralta Lorca completed the work "Welcome Less Is More," a wooden reconstruction of Mies van der Rohe's Farnsworth House that was installed inside the Patricia Ready Gallery in Santiago, Chile. This September, a new version of this work will be mounted in the hall of Santiago's Museum of Contemporary Art, under the name "Home Less is More."

In the following story, the artist tells us about the process of reinterpreting this icon of modern architecture in wood and how a team of carpenters—who agreed to immerse themselves in the philosophy of Mies—was fundamental to completing the challenge.

Since I was a student I've been fascinated by a particular type of visionary architecture: buildings such as the Cenotaph for Newton by Boullée, the House of the Park Guard and the Salinas at Arc-et-Senans, both designed for The Ideal City of Ledoux, Fallingwater by Frank Lloyd Wright; and especially the Farnsworth House by Mies which, above all others, seems to be the ultimate architectural reference—not just for its style, but because of the way it treats the space and its context.

As could be expected, as soon as the invitation to realize the "Welcome Less is More" exhibition arrived, Manuel Peralta Lorca, who had studied several years of architecture at the University of Chile, decided to build his own version of the Mies house at 1:1 scale—the dream of any architect. But Peralta wanted to impose upon himself two elements of difficulty: the house would be rebuilt exclusively in wood and would be installed inside the space of the gallery.

I had a clear sense that even when empty, without objects inside, the gallery contained aspects of Mies's thought, a sense that Mies was somehow already there. What I needed to achieve was simply to make it visible.

The artist considered it fundamental that the work should be executed without plans, understanding the project not as a reconstruction or a new version of the house but rather as something a little more sophisticated than the result of reading the plans. Through this approach, an interesting process began, with successive conversations with the team of carpenters with whom he would build the house. Peralta had to tell them the history of the original house, as well as explain to them who Mies was and the influence of his concepts in the history of contemporary architecture.

I began by conveying to them that the house must appear to float above the floor, supported only by eight pillars holding the horizontal planes of roof and floor. I visually equated this structure to a soccer goal, which is a very clear and precise way to understand the concept of spatiality. That's where we started, like soccer, from goal to goal. As there were no plans, at first the carpenters continually questioned the dimensions and proposed to modify them. But as they got involved in the construction, they realized that, even without plans, there was a very precise ideal that was being sought.

The house was built with pine boards and plywood, materials that usually aren't valued highly in Chile, as they are considered materials for emergency or low-cost housing. With the help of a structural architect, Peralta was able to respond to the material and structural properties of the wood, allowing him to remain faithful, as far as possible, to the actual dimensions of the metal structure of the Mies house.

The only fixed reference we were working with was the actual length of the house: 24.5 meters. It was interesting to go beyond the small differences of dimensions compared to the original house that began to appear as a result of variations in the measurements of the boards and plates. At first, for example, I misread my notes and thought that the gallery was 5 meters shorter than the house, a mistake that made me feel bad for a few days... I had to continually buy a lot of wood, since even a house as empty and transparent as the Farnsworth House consumes enormous quantities of wood.

As happens in life, as the construction progressed, things began to move according to the ideal that Peralta had in mind, all helped by the team of carpenters who by that time already found themselves completely immersed in the "rules" of Mies.

From the beginning I wanted to fill the space completely, until the gallery disappeared. I wanted to make sure that once you entered the space you were no longer walking in an art exhibition hall, but on an architectural installation, a house, climbing the famous staircase and recognizing that you were on the porch, in the living room, in the bedroom or in the kitchen.

Predictably the replica, once it was completed, was adjusted so precisely within the space of the gallery that it removed all notion of context: without the presence of the landscape of Plano, Illinois, with those trees and fields, our house is no longer the Farnsworth of Mies, but a different house completely.

Share
Or
Copy
About this author
Pola Mora
Author
••• 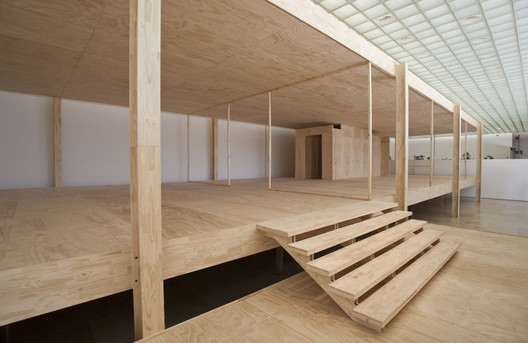