All
Projects
Products
Events
Competitions
Save
Space Renovation of 69 Beishan St. / The Design Institute of Landscape and Architecture China Academy of Art

The project is located in No. 69 Beishan St. Hangzhou, China. The area is about 30 meters both in length and width including three houses built on the site. One of the houses was built in 1930s with a 2-storied western-style, and it was identified as a historical building of Hangzhou. Sadly, it has been forgotten by the public due to its bad maintenance. In the middle of the last century, a famed writer, Mang Shi, had lived in the house, and named it “Jiyi House.” It attracted a lot of scholars during his life.

The main house was structured during the era of Republic of China with post and pane, and several parts were added in 70’s of the last century. The two houses with one floor on the back was intentionally built 10 years later than the main house. There are several trees near the houses, and their ages are the same as the construction’s. Because of the house owners’ wants, they built a few temporary rooms with simple and precarious structure, and the changes made the space look unorganized and suffocated. The three houses have been abandoned for many years and identified as dangerous buildings.

There is a yard with two trees in the middle of this site. All the architectural functions are fully worked around this yard so that the trees look like a real protagonist.

Between the entrance of the courtyard and the exterior road, there is an altitude difference of 3 meters with 5 tall trees on the path. The road to the entrance is paved with old slates and Chinese bricks, which were removed from the original houses. We planted Longjing tea trees on the both side of the path, so that it could work like a buffer for the space between inside and outside.

The central yard is a quite narrowly spaced, and we handled the exterior wall, making it look like an opposite scenery of the main entrance. We used two different textures of red bricks removed from the original houses, so the contrast of shadow on the wall was able to become strong. In this way, it shows an interesting shadow made under the sunlight.

The one floor suit, which has the independent courtyard, is on the north side. In order to make the space interpenetrate each other, and take into account the privacy of the room at the same time, we try our best to set up large glass windows.

There is not too much decoration on the external walls of the building. During the renovation, we hoped that the texture and color of the wall materials would reflect each other. Thus, we did not do any decoration on the red brick and Chinese brick part. For the main house on the street side, we used a gray water ripple paint to retain the historical features of its painted external walls. Thus, people will enjoy this design while visiting the West Lake.

The upstairs loft is quite low and narrow while being known as the best location to watch the West Lake. Only the skylight can improve the indoor experience. There could be a gorgeous painting of sky blue and tree green when people look out through the skylight. We re-built the roof, and transformed a part of the roof into a flat terrace. Here, you can take a sip of tea, chat with your beloved, and take enough rest as much as you want.

The project was completed in October 2016. There was a high volume of hotel guests when we visited the building several times the next year. With regards to renovating the historical buildings, we gave our own views and put them into practice. Thus, the time will tell how the views are well-delivered. 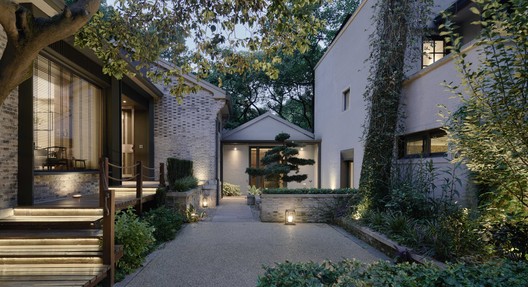