Zaha Hadid Architects, collaborating with digital artists and computer science researchers Andy Lomas and Mubbasir Kapadia, have been selected to create a projection mapping light show at the 2017 Schlosslichtspiele Festival in Karlsruhe, Germany. Titled ‘Behaviour Morphe,’ the dynamic light display will be projected onto the city’s 18th century baroque palace, simulating how users move throughout and interact with the building’s interior spaces.

The project will showcase the latest digital spatial simulation technology used by ZHA in the analysis and planning of their architecture, revealing how artificial intelligence and digital tools can be applied to building design.

"As an architectural interpretation, the projection outlines ZHA’s Computational Design (CODE) research group’s work in these iterative systems of development."

In addition to the video from ZHA released today (above), the Karlsruhe Center for Art and Media released this alternative video of ‘Behaviour Morphe’ earlier this month:

Other architects participating in the 2017 Schlosslichtspiele Festival include Hani Rashid, Lise Anne Couture and Greg Lynn. The festival will run from August 3rd to September 10th. Learn more about to event in the video below, or visit the website, here. 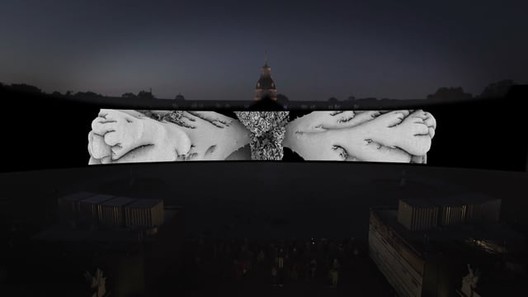