Text description provided by the architects. While the brief for this project included a specific aesthetic, the uniqueness of this home is extraordinary. Residing in an inner suburb of Melbourne, the sculptural form of the house has been inserted into the residential landscape, with a cantilevered upper-floor clad in aluminium slats, the day-time presence is that of a textured and patinated container over glass. At night, however, when lit from within, the upper floor becomes a lantern, while the lower floor falls away to give the impression of a single sculptural form floating in the night sky.

On an exceptionally narrow site, the solution was to build to the full boundary of the block, effectively making the new house as wide as possible without creating laneways between the adjoining houses.

Contained within glass walls, two of the four courtyards read as a continuation of the living area with the largest courtyard at the rear of the property. To one side a long swimming pool follows the boundary, while the opposite side provides a louvered skylight that continues out from the house to the garage as a long cantilevered canopy.

At the heart of the house, the internal courtyard, containing the sunken lounge and fire pit, is walled on three sides by glass. “The spaces are carved out and sculptural to optimise the overall form and allow microcosms of daylight and ventilation to permeate the whole” says Michael Bialek, Design Director at SJB Architects. Visually continuous, the floor remains the same level inside and out before giving way to a series of steps and the floor of the courtyard. Designed for cushions and lounging, the area is also highly architectural in its material aesthetic of polished concrete.

The upper floor continues these aesthetics with generously scaled bedrooms, en-suites and simplicity of line. Not wanting to finish the stairwell with a balustrade or wall the design incorporates a long bespoke shoe cabinet in American oak. Rather than stop at the adjoining room’s threshold the desk continues into the bedroom. The room however, remains separable with a sliding door that cuts through the desk. Bi-fold louvered screens to the street facade of the upper floor mitigate westerly sun while limiting the view to an outward aspect that ensures the privacy of both the residents and neighbours.

While the rarefied aesthetic and variable utility are outstanding, what makes the house exceptional is the experience of the space. Intimate and private on arrival, the house is very much concealed before opening to the view as the journey into the house is revealed. 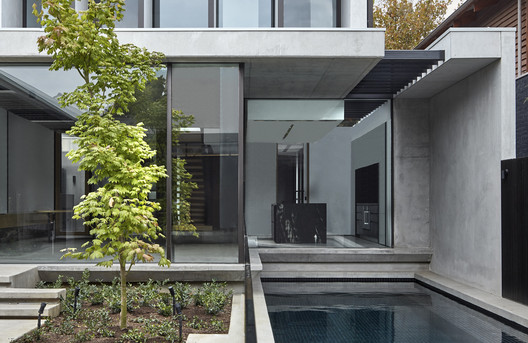