C.F. Møller has been selected as the winners of a competition to design a community-focused highrise in the Stockholm neighborhood of Kista, a district known as the city’s tech hub that is in need of attractive, contemporary living options. Known as Geysir, the 15,000-square-meter building will provide 220 new units of varying size, as well as 2,000 square meters of retail space, helping to develop the urban quarter.

"With its strong basic concept and stringent architecture, the Geysir proposal wins the competition for a new residential complex in Kista for Aros Bostad and Vasakronan. With elegant volume displacements and double-sided façade finishing, Geysir creates interesting silhouettes and spaces. Geysir has great potential to lift the square, interconnect Kistagången and Isafjordsgatan, and attract residents to the heart of Kista," said the competition jury in their citation.

The design of Geysir has been divided into two volumes, offset in section, to create a dynamic form and to open up double-height spaces facing the main avenue, Kistagången. The building also incorporates several green elements, highlighted by a large landscaped communal terrace.

"The panoramic views of Stockholm, green rooftop terraces and a lively ground floor – where residents can interact with all the people who work and study in Kista – will form the setting for modern living," says Mårten Leringe, CEO of C.F. Møller in Stockholm.

On the two lowest floors, a food court with a deli, cafe and restaurant will invite both residents and community members to eat, with outdoor dining available in the adjacent courtyard. A low fence in the courtyard area will provide a visual border between the public and private areas, where residents will have the opportunity to grow their own crops.

Material choices throughout Geysir include a sleek terrazzo and tombac, as well as a double-sided façade finishing, cloaking the building in a series of interesting silhouettes and spaces. 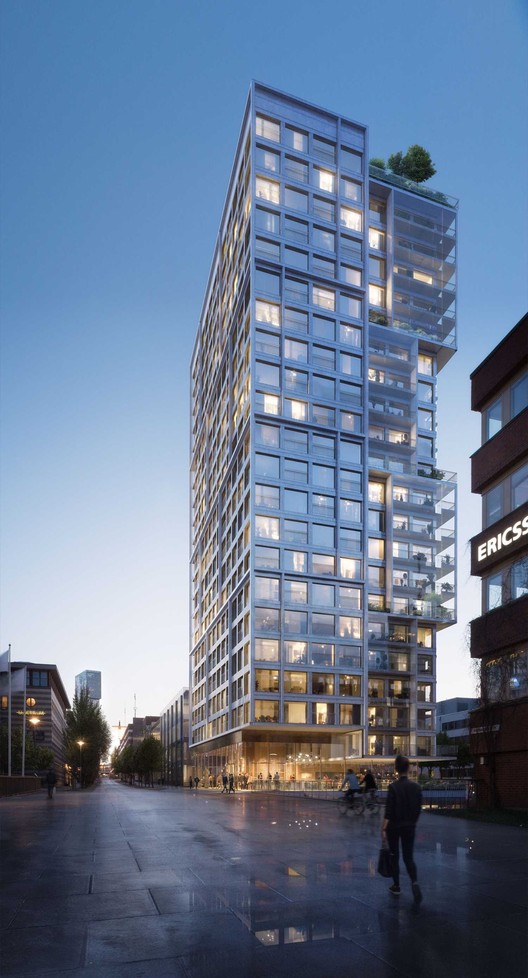