Text description provided by the architects. The project is situated in in the Coyoacán neighborhood of Mexico City. It consists of the modification and intervention of a house built in the 1970s.

The proposal focuses on adapting the architectural concept that was no longer able to meet the needs of its new inhabitants.

One of the primary targets was admitting daylight into all interior spaces and improving the visual connection between the house and its immediate surroundings. The garden is dominated by a more than 80 years old peppercorn tree that is framed on two sides by the building. The original building structure had windows with false arches and thick wooden frames. Both have been changed and the new, rectangular steel frames offer a better view and general transparency on the ground floor level. The necessity of constructing a new cistern in the garden was taken as a pretext to create a surface of water on top of the container, serving as a mirror for the crown of the adjoining peppercorn tree and to cool down the air flowing through the garden.

The interior was reorganized, demolishing walls in order to organize kitchen, dining space and living room in a "plan libre". The newly introduced wooden staircase becomes part of the integrated furniture on ground floor and first floor.

The intervention consists of the reactivation of the roof terrace as a loggia/greenhouse, that also serves as the a vestibule to the first floor bedroom which is extended by an extra bathroom. A service room on the ground floor is reduced to a minimum, generating a service patio on the back of the house. This new exterior space offers light and ventilation for the kitchen.

The now detached service room is provided with a new, permeable facade made out of extremely light clay tiles, stacked with minimum use of cement and a technique similar to a house of cards.

In order to make a visual distinction between the original structure and the new parts of the building, an experimental shuttering technique was used for the concrete elements cast in place: the surface structure is created by introducing petate-sheets (carpet-like elements that are hand woven out of palm-leaves) into the concrete

The need for a cistern, gave way to propose a water mirror with the idea of ​​reflecting the old peppercorn tree . 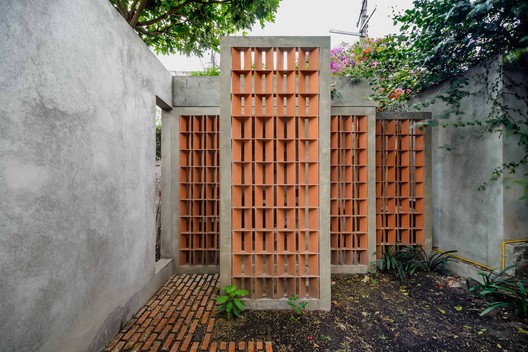