“The design approach for the Center is guided by the goal of creating a true community asset that seeks to inspire and empower the public to take on the greatest challenges of our time," said Tod Williams, Billie Tsien and Dina Griffin of Tod Williams Billie Tsien Architects | Partners and Interactive Design Architects.

"The Obamas were clear that they wanted the Center to seamlessly integrate into the Park and the community, and include diverse public spaces. Our hope is that this design for the Center interspersed with Jackson Park honors the legacy of Olmsted and Vaux and unlocks potential and opportunity for Jackson Park, the South Side, and the City of Chicago.”

All three buildings will be clad in light stone with substantial areas of glass. The model displayed at the South Shore Cultural Center also suggests that while the two lower buildings will be both be one story tall—with accessible garden roofs—they will also contain a significant amount of space below-ground, bringing the total area of the project to between 200,000 – 225,000 square feet (18,500 – 21,000 square meters). Located in Chicago’s Jackson Park, the Tribune notes that the design appears to call for the closure of Cornell Drive, a thoroughfare that currently runs through the park.

Tod Williams and Billie Tsien have been selected of the recipients of the 2017 LongHouse Award for their "for their outstanding body of work in architecture." At Wednesday evening's ceremony, the husband-wife team opened up about the conceptual ideas driving their yet-to-be-revealed design for the Obama Presidential Library.

The Obama Foundation has selected Tod Williams Billie Tsien Architects (TWBTA) with partner Interactive Design Architects (IDEA) to lead the design of the Obama Presidential Center for Chicago's South Side. 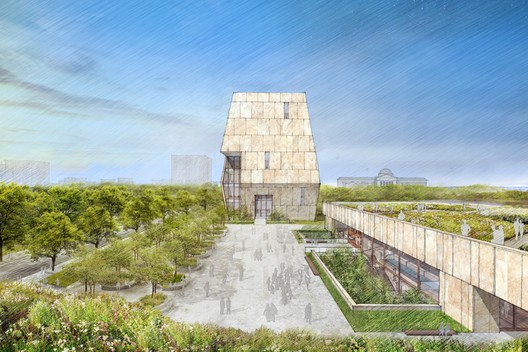