Save
If Your Annoying Coworkers Were Indiscreet Buildings
Share
Or
Copy

The connection here is plain and simple: bad coworkers, bad architecture, perfect pair. It's not uncommon for architects to take inspiration from the human body, but consider these eight pairings to be what would happen if your least favorite coworkers were reincarnated in building form.

The Coworker: Corey the Conversationalist
The Building: Your friendly neighborhood LED-covered building

Corey's a sweet guy, really, he is. But at a certain point you'd prefer your workflow uninterrupted by him trying to start up a conversation with you or loudly gabbing to someone else. The hearing loss you've just started to notice might be solely from turning up your headphones in an effort to drown him out. Fast forward to bedtime after a long day at work—all you need is some sleep. Unfortunately for you, the new building down the block is trying its hand at an LED skin, and the bright flashes streaming in through your curtains are like dealing with Corey all over again. Sweet dreams!

The Coworker: Laura the Latecomer
The Building: The Louvre Abu Dhabi

You're not even bothered when she shows up late to work, but when you and everyone else manage to arrive on time to meetings and are left waiting for Laura before you can begin, you're allowed to get a little miffed. The Louvre Abu Dhabi has been pushing its opening date forward for years, and both it and Laura have you questioning why you even bother being on time at this point.

The Coworker: Patrick the Peacocker
The Building: The Grand Lisboa in Macau

There's always the one coworker who just can't take the hint. Without fail, you'll find him strutting his stuff with the newbies with a lack of self-awareness like you've never seen before. You're left wondering how he would do competing for patronage as one of Macau's flashiest casino towers: the Grand Lisboa.

The Coworker: Beatrice the Borrower
The Building: The Piazza d'Italia in New Orleans

Bea is always missing something, which is weird because it feels like the only time she leaves her desk is to ask you for a pen that she may or may not return. Her workspace is a hodgepodge of supplies assembled from people all over the office, not unlike Charles Moore's Piazza d'Italia, cobbled together playfully from various Renaissance elements.

The Coworker: Promotion Paolo
The Building: The Fang Yuan building in Shenyang, China

Paolo got the promotion that you really wanted, and now he can't stop mentioning his new position in every conversation you overhear. It definitely feels like he's trying to gloat in your face. Even if he hasn't mentioned the pay raise (yet), he's acting an awful lot like CW Lee's Fang Yuan building, which takes the shape of an ancient Chinese coin and forgets to translate it into something a little more... subtle.

The Coworker: Patronizing Perry
The Building: The Walkie Talkie in London

Perry, Perry, Perry. When will he learn how to talk to coworkers without making them feel small and incompetent? It may be "the way he grew up," but that doesn't make his behavior any less frustrating. His demeanor reminds you of the way Rafael Viñoly's Walkie Talkie tower imposes itself on its surroundings and of the accidental but ultra-powerful heat rays that shot off of the building when it was first built.

The Coworker: Paula the Pen Clicker
The Building: the Ryugyong Hotel in Pyongyang

Most of us quietly open Facebook when we get bored at work. Paula doesn't seem to have anything to occupy herself but a stash of ballpoint pens, which she clicks incessantly. Pyongyang's painfully pointed Ryugyong hotel is almost as obnoxious as the sound of that Pilot G2 Gel Roller.

The Coworker: D*ckish Dominic
The Building: the Doha Tower in Qatar

Dominic, Dominic, Dominic. There's not much to say here: when you're a d*ck, you're a d*ck. He stole your lunch today, and tomorrow he'll probably "accidentally" trash your fresh plot to make room for his new one. Dear Dom is best represented by one of the most phallic buildings we could find: the Doha Tower. 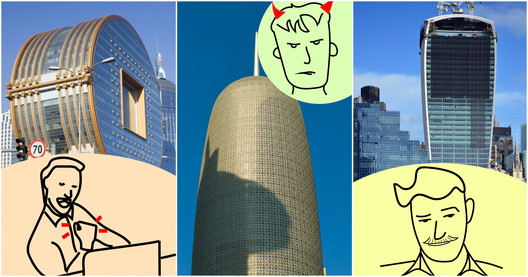