Text description provided by the architects. In order to understand the origins of the residence’s name, we have to go back to the story of one of its two inhabitants. During his childhood, this man used to live on the family-owned farm in the Centre-du-Québec region. When he grew older, his parents left him a sizable portion at the far end of their land that they could not cultivate. Literally meaning the “far end” Les Abouts remained unoccupied for quite some time. After a couple of years spent abroad, it became obvious to the owner that he should colonize the parcel of land he had inherited. Therefore, he and his partner together decided to have a secondary residence built on Les Abouts. As art collectors and enthusiasts, they decided they wanted wide spaces to showcase their various acquisitions throughout the house.

When the vast glaciers that once reigned on this region subsided at the end of the last ice age, it gave way to the vast fertile plains today known as the St-Lawrence Lowlands. Just like the Lowlands, the house’s site is influenced by the passage of water. It can be reached by passing through the plain and driving down a short slope towards a wooded plateau. In a small glade bordered by ferns and a small river, we found the ideal spot to build the house and immerse it in the surrounding nature.

The plane was given much freedom and separated into two areas, common space and a more private zone. The private part stretches to around thirty meters to border the nearby river. Covered by a thin roof, the volume looks as if it is levitating among the trees. Housing the master bedroom, two bathrooms, and the kitchen, it was designed to be opened on the surrounding nature and very well-lit. The relationship between the inside and outside is underlined by a fly screen room prolonging the volume and overlooking the ferns.

The common space is a volume on two levels designed to reflect the verticality of the forest. It is also the receptacle of the larger works of art. In order to leave the most possible space on the walls, the guest’s bedroom and the library are suspended in a small volume. Detached from the sides by a glass floor, the volume gains a floating aspect in the double-height and brings variance in the scale of the room. As a wooden chest, the house becomes a recipient where art and nature meet.

This project was originally published in 2017. 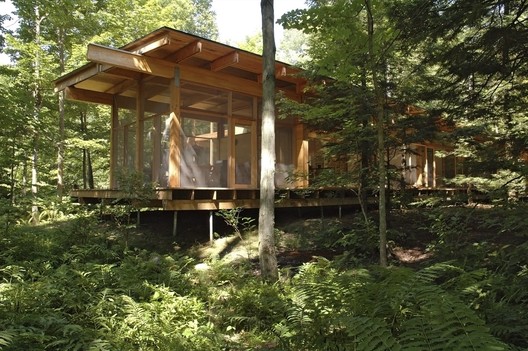