All
Projects
Products
Events
Competitions
Save
Understanding the "Public Interior," From the Palace to the Garden
Share
Or
Copy

Public Interior is no less ambitious. It looks closely at the development of a series of themes—the garden, the palace, the ruin, the shed, the machine and the network—all of which formed the subject of a series of lectures given to Masters Students in Architecture at the Delft University of Technology. Through these themes, Pimlott examines different types of interior spaces, which are considered public, not necessarily in terms of ownership, but in terms of their capacity to be taken as ‘public, even though they may be privately owned and operated’.

Pimlott first introduces the concept of interiority which emerges from early settlement patterns, and is iterated at every scale – whether "a dwelling, a temple, a settlement, a city or a continental territory." The idea of the interior as relational is one that runs throughout the book, and one of architecture’s fundamental roles is to "situate and bind" its sheltered interior to the world. The book performs much the same function, taking each of the public interiors identified in the book and relating them to a wider historical, geographical and social context. This, then, is the project: It shows a city’s public interiors as a collection of spaces that reveal something about the city itself and the people who live in it, and how vital these are to civic life and, indeed, survival. The corollary to the relational process of creating an interiority is the ideological process of othering, which is often none too subtly reinforced by cities and their planning, architecture and its interiors. This introduces a thread of political thought to the book which underpins much of the work, emerging clearly again at its conclusion.

In the first chapter, Pimlott traces an arc that begins with the idea of landscape and the designed, picturesque garden: "a potent site for contemplation of the world, one’s place in it and the conceit of one’s dominion over it." The chapter concludes with an exploration of the workplace interior (office landscapes or Bürolandschaft) and internal atria. The office environment is concerned with planning and organisation inasmuch as it describes implicit and explicit power relations. Picturesque landscapes worked in a similar fashion, using vistas and architectural fragments or follies set within pastoral contexts to suggest hierarchies and other forms of control using visual and spatial relationships.

This conception of the designed environment finds one of its greatest forms of expression in the great glass houses, such as Joseph Paxton’s Crystal Palace built for the 1851 Great Exposition in London’s Hyde Park. These glass enclosures were also replicated in greenhouses, conservatories and smaller vitrines and caskets across the country. The building of structures such as these coincided with the rise of bourgeois culture in Northern Europe which was itself, as Pimlott notes, "driven by colonialism, and the subjugation, exploitation and removal of resources from faraway lands by force." These structures and spaces created an internal environment that could contain and sustain plants as well as a wide variety of other objects and artefacts. They demonstrated the empire’s reach while also reflecting a mythical, but nonetheless enduring, national self-image of power, influence and beneficence.

Urban parks function in a not dissimilar fashion, as "public interiors within the body of the metropolis" whose carefully crafted, utterly fictional, bucolic landscapes offered a counterpoint to soften and ameliorate their host’s urban project. It did this while also suggesting that the countryside outside of the city could be managed or controlled. Office atria, such as in Roche and Dinkeloo’s 1969 Ford Foundation in New York, embraced "the idea of a contained pre-urban fragment, representative of indigenous hinterlands – much like the fiction of Olmsted’s Central Park."

The Crystal Palace appears again in Pimlott’s chapter on The Shed. The author draws links between it and other typologies such as market halls and transport terminals. Each of these spaces have their own qualities as ‘public interiors’ and these new associations enable us to understand the glass house from a slightly different perspective. This occurs a number of times in the book; Lina Bo Bardi’s SESC-Fábrica de Pompéia, for example, is examined both in the chapter on ruins and, once again in the chapter on sheds.

The approach creates a textured, multivalent analysis which prompts you to read, re-read, page backwards and forward, examining and re-examining, thinking and rethinking. The book is impeccably researched and referenced, and written with a generosity and openness that evidences Pimlott’s deep knowledge of the subject. It is beautifully illustrated (many of the photographs are the author’s own) and each chapter ends with a comprehensively referenced visual index, which appears again at the end of the book.

Most of the chapters finish with a very recent built example of the theme explored, but only the last chapter—on the network as public interior—offers a conclusion. Pimlott observes how many ‘network’ spaces are under threat from creeping commercialisation and surveillance and offer little respite from the increasingly consumer-driven character of public life. He suggests that a public interior ‘might place us in profound contact with our own material culture, with what we have made in the world, with the natural world and with each other’. The network, which ‘enables or structures connections in cities’ and is ‘bound to its experience’ offers that potential. This observation reads as propositional and perhaps the greatest compliment I can pay the book is that it will undoubtedly influence my own work (which often involves the design of public interiors as conceived here). It has already influenced the way in which I read, understand and navigate the city that I live in. 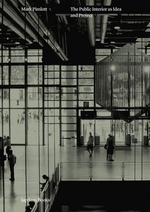 Mark Pimlott (Montréal, 1958) is an artist, architectural designer and writer, whose practice encompasses installation, photography, film, art for public spaces and architecture, particularly, interiors. He has taught architecture and visual arts since 1986. He was Professor in relation to practice in Architecture at TU Delft (2002-2008), and is now Assistant Professor in TU Delft's Chair The Architecture of the Interior. He is the author of Without and within: essays on territory and the interior (episode publishers, 2007) and In passing: Mark Pimlott photographs (Jap Sam Books, 2010). His articles and essays are published in numerous journals of architecture, and he lectures widely.

Share
Or
Copy
About this author
Nicholas de Klerk
Author
•••