Having found success in their winning competition entry for PEX Toulouse (currently under construction), the partnership has rejoined forces to take on PEX Bordeux. The architects designed their proposed addition with the goal of embedding architectural fragments to capture the essence of the original building.

The brief required that the design create an adaptable modern intervention, integrating with the building its history and its surroundings. The addition is conceived as a complementary, rather than competing, element to reconstitute a new overall architectural figure with the original Hall 1.

The program's organization strives to maximize versatility, allowing the addition to interface with the new urban fabric and create connections to the existing building. The project further aims to engage the surrounding urban condition through transparency and sensitivity toward the history of the site. The linear intervention implements the building's functional units and celebrates its revered artifacts.

"We offer a 'symbiotic' device forming the new identity of the PEX Bordeaux, allowing the integration of the newly formed urban fabric," explain the architects. "The organization of the program is conceived in such a way that the greatest versatility may happen, and new interconnections may occur with the pre-existing Halls." 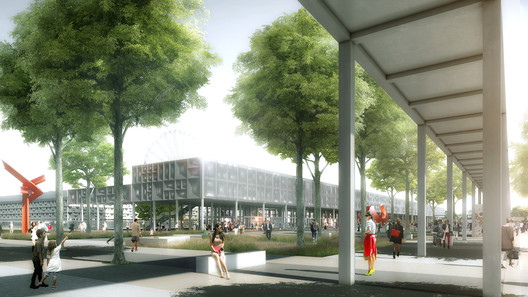