The Frankfurt Book Fair and Deutsches Architekturmuseum (DAM) have announced the results of the 2016 International DAM Architectural Book Award, their annual list of the ten best architectural books published in the past year.

This year, books were selected from 214 entries and 88 international publishers, based on criteria such as design content, quality of material and finishing, innovation, and topicality. The winning books feature a wide range of topics and graphic styles, and feature projects from all over the world.

Find the top 10 and additional shortlisted books below.

The book presents 80 Modernist structures in five countries, Ghana, Senegal, Côte d'Ivoire (Ivory Coast), Kenya and Zambia, which were built in the 1960s and 1970s, the first years of independence, when people’s hopes were at their highest. And to our eyes they seem unfamiliar and new, even though some of their architects were from Europe. Remarkable discoveries, our usual image of Africa with all its disasters and misery is transformed to one veering towards cool mid-century Modernism.

In “Stadt und Landschaft lesbar Machen” Anette Freytag vividly breaks down how design, theory, and presentation are interwoven in Dieter Kienast’s work, and how the latter is a combination of artistic, scientific, intellectual, and social aspects (gta Verlag). This makes the book clearly different from existing illustrated books.

This is an evolutionary building monograph on a small series of three settlements built towards the end of the French colonial era (1954-56) in Casablanca, Morocco, by the two young Swiss architects Jean Hentsch and André Studer. They built a structuralist masterpiece, which attempted to adopt approaches to regional vernacular architecture and enable future transformations of the rigid structure. This approach can be followed by means of the architects’ very historical looking travel photos of the country at that time. The actual transformations that occurred during the next 60 years are then shown, and thus the life of these structures, revealing a typical dilemma of well-meaning Westerners, whose cultural prejudices collide with the residents’ actual living habits.

Housing Cairo documents the aspect of informal urbanization in this metropolis with 20 million inhabitants. The book is the result of a Master’s course (Master of Advanced Studies in Urban Design at ETH Zurich) supervised by Marc Angélil, and using photographs and plans traces the city’s historical development through to the present day. Taking a district on the west bank of the Nile as an example, the methods of construction used in the very dense cluster is analyzed using photos and drawings.

The author Walter Scheiffele bases his publication on the 1926 book “Der Raum als Membran” by Siegfried Ebeling (1894–1963). At that time the latter developed his theory of biological architecture. On the basis of Ebeling’s biography, the books relates the history of lightweight construction and the theories behind it. It ranges from the Glass Chain and Bruno Taut, Paul Scheerbart, Hermann Finsterlin, and Hugo Junkers’ metal building projects, to Frei Otto and Werner Sobek. Interviews with contemporary architects were conducted and feature in the book.

The idea is so surprisingly obvious that one really wonders why no one ever thought of it until now: 62 buildings from the 20th century are presented in freshly drawn cross-sections (strictly speaking: cross-section perspectives). These cross-sections reveal not only the spatial qualities in each case, but also provide information about the way the edifices are constructed. Walls and floors are literally cut open, revealing some surprises: Who knew that Le Corbusier’s chapel in Ronchamps is far less solid than previously thought? Insights resulting from the method behind the cross-section make the book a textbook, which all architecture students ought to consult from their very first semester on. It contains a wealth of discoveries about structures that are seemingly familiar and have often featured in publications, which makes close study along the edges of the cross-sections a pleasure.

Based on a series of photos by Gregor Theune, this book addresses the phenomenon of adding stories to and extending existing residential buildings, as well as the continued construction of their type in the successor states to former Yugoslavia (“Nadogradnje”). It presents a good two dozen of these photographs, which are peculiarly fascinating: Time and again stories are added to pre-fabricated buildings form the socialist era – not infrequently in the form of timber-clad huts with gable roofs.

The Other Architect. Another Way of Building Architecture

This exhibition catalog, which was produced in collaboration with the Canadian Centre for Architecture, is about “The Other Architect”, in other words not about forms of architecture and the classic production of architecture, but about how new spaces and laboratories for working and reflecting in can be created outside traditional structures and beyond built edifices. It is not about building or buildings, but about thinking. The book is a collection of some 20 examples dating from the 1960s to the present day. They include, for example, the international ILAUD Group, IAUS in New York, and Forensic Architecture from London.

This is Frank Lloyd Wright

This short publication is a skillful mixture of a monograph about the legendary American architect Frank Lloyd Wright that by all means deserves to be taken seriously, and an entertaining closer look at a highly colorful character – an esteemed teacher, failed businessman, bon viveur. Even Wright’s extravagant dress style gets a mention. Short articles, sumptuous illustrations, and a cover made of hard cardboard give “This is Frank Lloyd Wright” the appearance of a children’s book. It is a clever disguise for a successful introduction to the work of one of the greatest architects of recent times – educational literature at its best.

Apart from the title “Völlig losgelöst”, which refers a to chapter of Pop music from the 1970s and 1980s, in terms of format and design this work initially appears to be a classic illustrated book. The book has recent architectural photographs of buildings from the era to which its slightly attention-grabbing refers. Using an extremely calm visual idiom and desaturated colors, Christian Flierl photographs buildings of which we are hardly still aware. Pleasantly short interviews by Ulrike Jehle-Schulte Strathaus and other authors, as well as a historical context help the reader understand this era and accept its aesthetics long after. Given the compelling nature of its content, theme, and style, this book deserves to keep on being perused and discovered.

The award ceremony will be held on October 19, 2016 in the library at Deutsches Architekturmuseum and all winning books will be presented at the Frankfurt Book Fair from October 20 to 23, 2016. 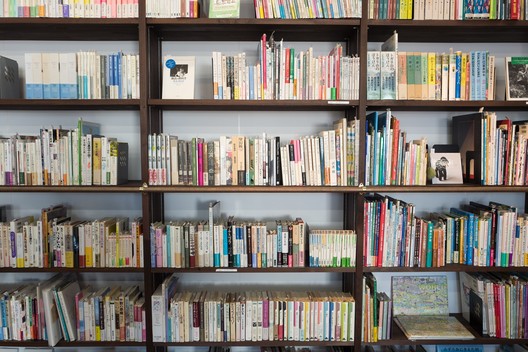