Text description provided by the architects. Stretching itself out on the meadow, looking at the sky and all that is close to it: tree crowns, nearby mountain peaks, clouds, flying birds… the open-air house establishes the relationship with the surroundings through the courtyard, open to the sky and elevated things, and at the same time protects itself from the road and the neighbouring houses.

This design project is located in a residential district build on an old vegetable plot and crops demarcated by pumice walls. The house is situated in one of the ends of this site and borders on a road in the north-west, on other houses in the south and in the east, and there are trees from the four winds. In this location, we lay out a ground level house, opaque in the north, changing towards the south and open to the sky through the courtyard, which is conceived as a big connecting space of the house. The garden, raised a bit higher than the rest of the plot, is equipped with automatic shutters, allowing different intensity level of interaction with the neighbourhood: from full opacity to complete openness, passing though the blinds with the changing angle of their slats. The L-shaped wall, built from its own reused pumice stone it the alter ego of the Persian blinds with their adjustable slats; its task is to isolate the house from the wind and the cold from the north as well as from the noise and the visibility of the busy road.

Over the former mosaic of vegetable patches, we draw a new 1.5 X 1.5 m plot, in which we fit the whole project. This order is expressed in the structure and also gives us answers about the layout and wall coverings. Inside the wall, almost left free-standing because of the linear skylight, there is a corridor, which is in charge of organizing the program for this dwelling: a space which connects the changing areas of the house with the sky always above and follows the relentless rhythm drawn by the structure.

The open-air house wants to come across friendly to the neighbourhood, bashful to the road and rooted to the ground; it wants to be a refuge of peace and quiet in the bustle of modern life. The open-air house is just a meadow of fresh grass where one can listen to birds and count the clouds floating above. 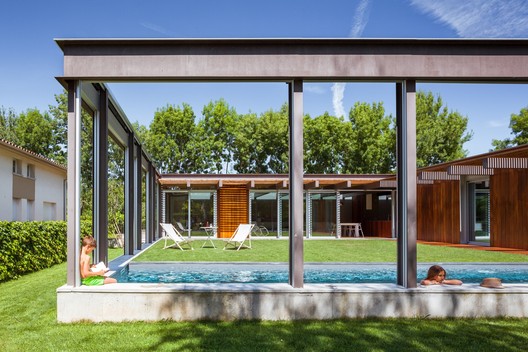