HW architecture, led by Lebanese/French architect Hala Wardé, has been chosen as the winners of an international competition to design the new BeMA: Beirut Museum of Art in Lebanon. The new museum will be located in the heart of Beirut and features a “central campanile tower” that will rise nearly 400 feet into the air as it becomes a new cultural beacon for the city.

The winning proposal was selected from a shortlist of 13 firms by an all-star international jury, chaired by Lord Peter Palumbo, which included architects Rem Koolhaas, Lord Richard Rogers, George Arbid, Dr. Farès el-Dahdah, and Dr. Rodolphe El-Khoury as well as Serpentine Galleries curators Hans Ulrich Obrist and Dame Julia Peyton-Jones. The late Zaha Hadid, who was active on the jury until her passing in 2015, remains an honorary member of the jury. 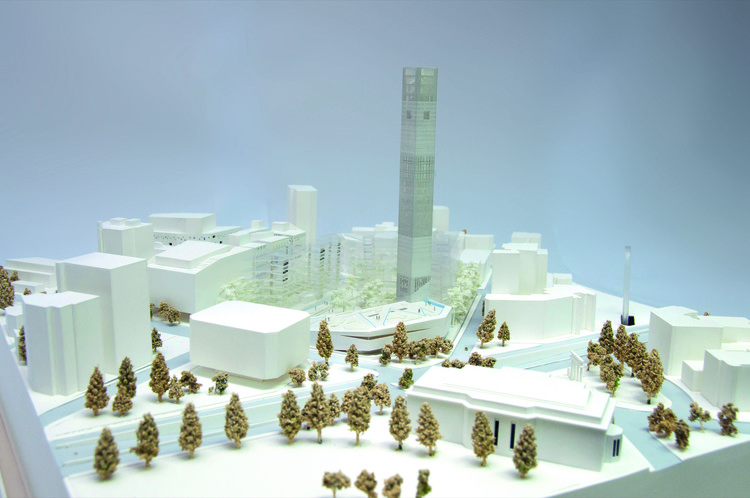 The new Beirut Museum of Art will be located on a “symbolically-charged” site in historic Beirut that once marked the dividing lines of the Lebanese Civil War. The museum will serve as a symbol of unification, displaying modern and contemporary works from Lebanon, the Lebanese diaspora and the wider region.

HW Architecture’s design is centered around a campanile tower containing space for workshops and performances, as well as artists’ residences that feature panoramic views of downtown Beirut. A public garden and landscaped promenade will accommodate site-specific installations and artworks in a lush, peaceful setting, while an amphitheater will play host to performances and events. As the Museum will be situated on a plot of land owned by Université Saint-Joseph (USJ), the selected design takes special consideration to its connections to the campus and to the larger urban surroundings.

In their citation, the Jury lauded the winning design for “the way it creates a succession of varied landscapes and spaces where art and society can come together. The connections between garden, amphitheater, exhibition spaces and roof garden have been well considered and offer a continuous visitor experience that lends itself to both exhibiting art and engaging with the community.”

“I am delighted and honored to realize my first major project in the city of Beirut where I was born, on such an exceptional site,” said Hala Wardé following the announcement.

“This museum program, in connection with the university, will allow us to create a new cultural and social space with a garden and amphitheater, and will single out this artistic territory with a strong and recognizable urban beacon, which through its multiple expressions, will belong to the new urban landscape of the city.  It is a moving coincidence to receive this news as the architectural world is gathered in London to honor Zaha Hadid, an inspiration to women and architects worldwide, who was originally a member of this competition’s jury. I am thinking of her today with great affection.”

As one of the most significant developments for Lebanese art and culture in a generation, BeMA is envisioned as a multidisciplinary hub of art and design dedicated to showcasing modern and contemporary Lebanese culture. The formation of BeMA: Beirut Museum of Art is spearheaded by The Association for the Promotion and Exhibition of the Arts in Lebanon (APEAL), a non-profit organization dedicated to international quality programs that support art from Lebanon and the global art scene.

The museum is expected to open to the public in 2020. More information on the museum and competition can be found here.