Launched in 2007, The Buckminster Fuller Challenge has quickly gained a reputation for being what Metropolis Magazine once called “Socially-Responsible Design’s Highest Award.” This year, for the first time, a Student Category was reviewed separately from the general applications, however still based upon the same criteria: comprehensiveness, feasibility, replicability, ecological responsibility, and how verifiable and anticipatory the project is. Students from the Centre for Human Habitat and Alternative Technology (CHHAT) claimed the prize with their adaptable and lightweight modular domes, made from natural, local or recycled materials. 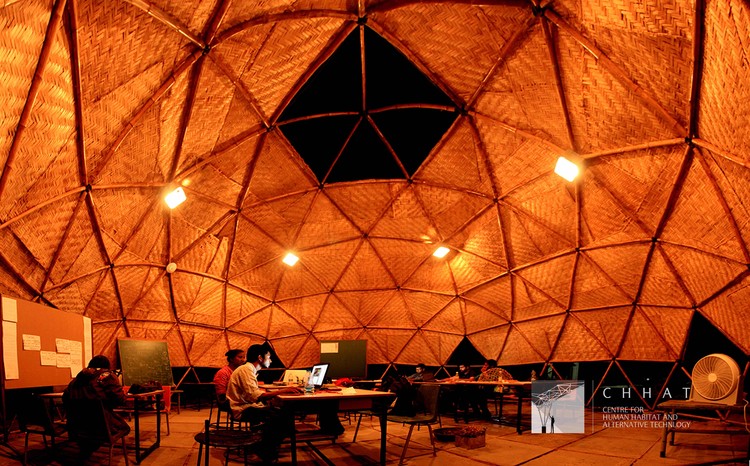 CHHAT is a student-led initiative founded at Vadodara Design Academy in Gujarat, India. Participants of their projects span all five years of the academy’s architecture program, as well as academic and professional mentors, led by Professor Nirav Hipara. Co-founder Sapan Hirpara, currently a student at CEPT University in Ahmedabad, India, submitted the program to the challenge in the hopes that their designs for rapidly deployable shelters could help to make inadvertent human habitation more functional and economical.

Currently, the domes are being used to meet immediate needs on the Vadodara Academy Campus, but are envisioned to serve as temporary spaces for rural and agrarian activities, as well as shelters for homeless migrant workers and people living in informal urban areas. Their short construction time also makes them ideal for emergency shelters after natural disasters, such as floods or earthquakes. In addition to this, the bamboo structures can then continue to be used as communal areas in schools, or as exhibition spaces or medical camps.

Steel joints link the bamboo structures, which are then covered in bamboo mats and an insulating Styrofoam layer, and finally covered in a waterproof PVC flex sheet. Spanning the entire perimeter of the dome is a gap nearly the height of a person, providing a well-ventilated environment and open atmosphere. The bamboo skeleton of the larger design can be constructed in about five and a half hours, taking another four hours to be completely covered and ready for habitation. CHHAT has also developed a tent for fewer inhabitants, in addition to the communal dome, that takes only ten minutes to assemble. However, circular canopies remain their focus and expertise, having studied and constructed various dome alternatives over the past six years, culminating in their Fuller Challenge submission.

The locally sourced materials and easy-to-use tools have made it possible for the students to involve regional craftsmen that can contribute to the program, demonstrating how good design can bring communities together and give back to society. Hopefully these advantages of the geodesic domes will allow the temporary structures to succeed in areas where craftsmen may not be readily available, widening the possibilities for anyone lacking some of our most basic human needs: safety, protection and shelter. As Buckminster Fuller put it: “All of humanity now has the option to 'make it' successfully and sustainably, by virtue of us having minds, discovering principles and being able to employ these principles to do more with less.”