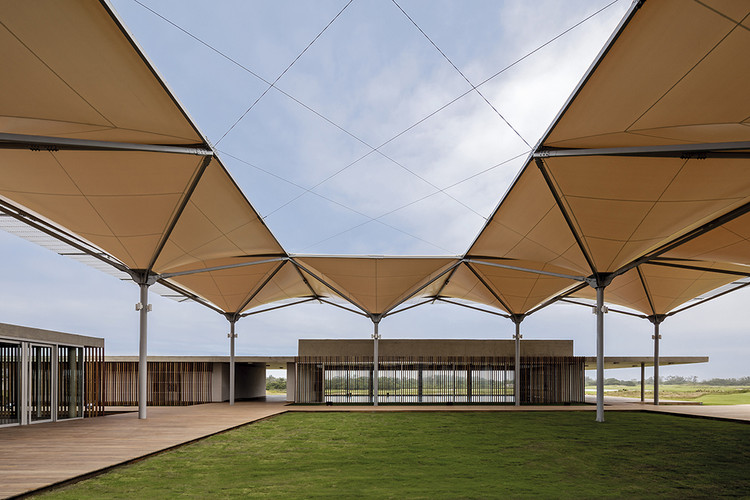 Text description provided by the architects. The veranda as a guideline

Golf is a sport of precision and balance, and we believe the same goes for its architecture. The outdoor practice, among the exuberance of natural elements, inspires the creation of spaces which are close to the landscape, well lit, wide, ventilated and in direct contact with the course. It is also a sport where players socialize before, during and after the game, reinforcing the importance of the clubhouse’s architecture.

For the Olympic clubhouse we chose to design a building organized like a comfortable veranda, dissolving the limits between the landscape, the building, and the users. For this purpose we initially created a plaza which articulates the course with the programmatic volumes around it. It was then roofed by a large cover which shelters and shadows, producing a pleasant ambience. The proposal also utilizes traditional Brazilian architectural elements like parasols, brise-soleis and cobogós, in order to create comfort and appease the spaces between interior and exterior. The attention to these intermediate spaces is therefore an inseparable part of the architectural design.

The placement of the ensemble which constitutes the clubhouse follows a few main premises: its close and direct relationship to the course and driving range; the fragmentation of the volumes in favor of landscape views, the mitigation of the construction’s impact over the soil and local vegetation; the disposition of architecture through circulation axes and around the plaza.

From the entrance a generous inclined pathway heads towards the golf course, with a privileged view.  Through this path we implemented successively the gym, restrooms and locker rooms, Pro-Shop and reception, culminating in the plaza which leans onto the course from one side and houses the administrative headquarters and social areas. Above it, the translucent roof captures rain water and provides shade. An internal garden acts as an extension of the surrounding landscape, which can also be appreciated from the roof garden above the restaurant, accessible through a ramp.

The usual flux of the players, consisting mainly of the course scheduling in the Pro-Shop store, a stop by the changing rooms and return to the bar after the game, was granted special attention in the project’s development.

The headquarters of the Brazilian Golf Confederation was implemented adjacent to the golf course, in the northern part of the terrain, so as to maintain a certain independence from the other areas of the clubhouse.

The service areas were designed around a patio for the operation of machinery and course maintenance, in accordance to the efficiency guidelines provided.

The clubhouse of Rio de Janeiro Golf Club affirms itself through a generous architecture, bright, open and welcoming to current and future practitioners of the sport. 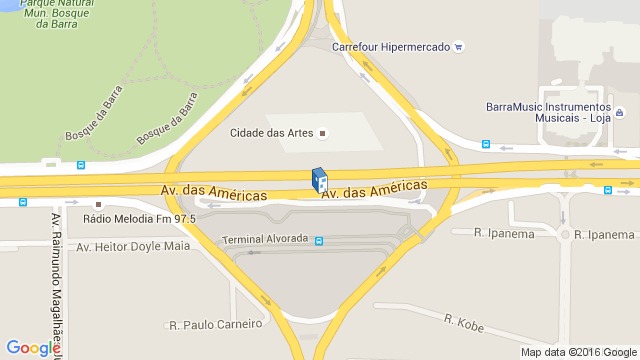 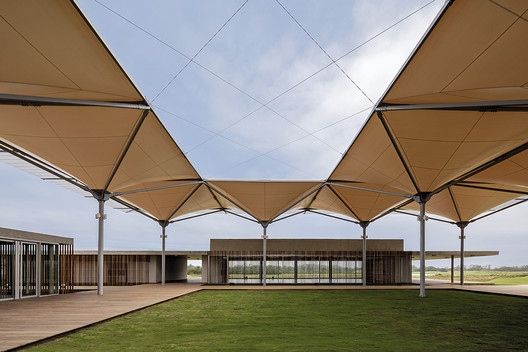