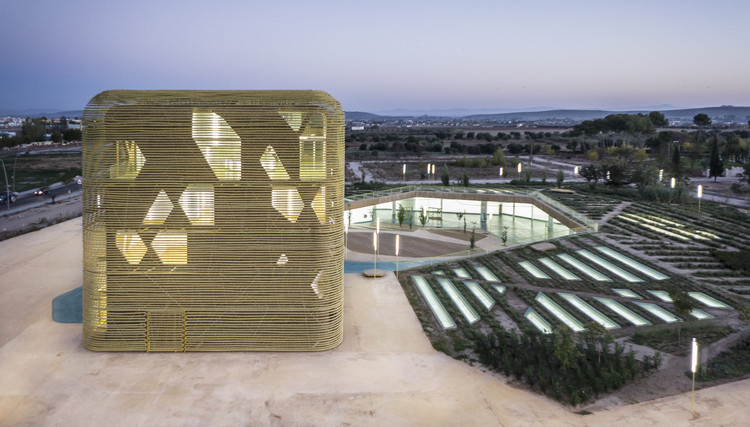 Text description provided by the architects. The "Vegas Altas" Center grows in an ambiguous peripheral location, in a land that is both urban and agricultural. Occupying the first or last crop field. The architectural proposal is intended to highlight this timeless condition of building belonging to the “Vega” as a free-standing building, floating in the countryside like a giant bale of straw with a flat horizon.

On one hand, it is a building that hides its status growing underground. The program is drawn on a half-buried ring that adapts to the terrain and to the boundaries of the plot, but hides his condition hiding to visitors. On the other hand, a cubic volume rises categorically and boldness. The only building perceived above ground, appropriate for both the visibility and the representability required, homes the large volume needed to absorb the magnitude of the stage box. The building has 2 halls for 800 and 275 spectators. They can be used either at the same time or independently, flexibly adapted to the nature of the event.

It reinforces its urban character, iconic, with a platonic geometry of a perfect cube, but in turn loses its built character as it is a field sown of  strips of vegetation and its surface is ripped with skylights over the underground spaces. The building gives ample public space to the town with a green cover over most of the program. The proposal extends like a large park and a square with a sloped ground serving to create an access to the building and to perform as an alternative outdoor auditorium.

The entrance is a polyvalent space in fluid connection with the outside. Its can be used for multiple purposes. An expanded liquid and continuous public space with the auditoriums at its ends, which bind on the opposite side by the area of services and facilities serving backstage, closing a ring under the ground serving both auditoriums. The building has a high thermal inertia through the concrete walls and green cover to maintain a constant comfortable temperature in winter and summer.

There is a material ambiguity in the general configuration of the building, the soil of the cover, the tone of the concrete and the ropes of the facades mimic the natural environment. However, its underground and watery interior is defined by a more artificial freshness. The exhibition space has a white, tense fabric, which extends the space reflecting an unreal environment. Auditoriums are made with green color polycarbonate that by the effect of indirect lighting becomes a water world without a precise dimension.

The building adheres to the climatic conditions of the environment without losing sight of its economy. Brought with low power consumption and easy maintenance. The performance adapts effectively to the austerity of the current economy, with special attention to construction to meet the tight consistency with existing budget and the needs of the extensive requested program. It is a silent object that aims to go unnoticed, although also is a lighthouse in the sea of the Extremadura’s field. 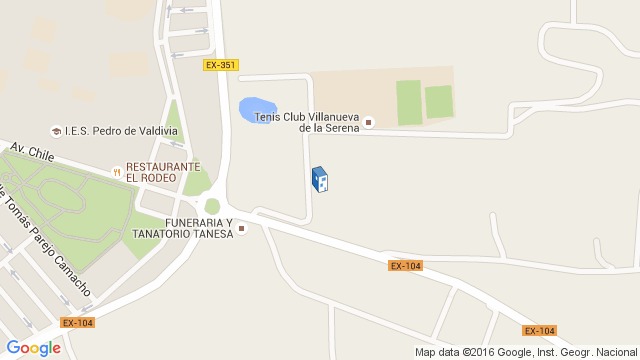 Location to be used only as a reference. It could indicate city/country but not exact address.
Share
Or
Copy
About this office
Pancorbo
Office
•••
Jose de Villar
Office
•••
Carlos Chacon
Office
•••
Martin Robles
Office
•••