A new installation by artist Katie Paterson and architects Zeller & Moye for the University of Bristol, Hollow has been permanently installed in the city’s Royal Fort Garden. Commissioned to mark the opening of the University’s new Life Sciences Building, adjacent to the gardens, the project has been organized by Bristol-based arts group, Situations. The installation, an agglomeration of wooden rods, is a collection of samples from over 10,000 unique tree species. Collected over a three-year period, the samples were sourced from arboretums, xylaria, herbaria, and collectors worldwide. The installation is joined by a companion website and public participation project, Treebank, in association with BBC Four. 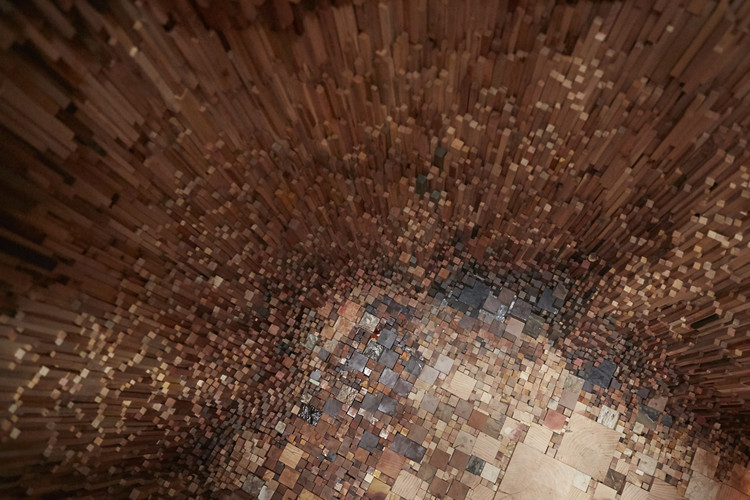 “The hollow interior is an introverted and meditative space where, whether sitting or standing, one finds oneself embraced by history,” say architects Christoph Zeller and Ingrid Moye. “Our design conjoins thousands of wooden blocks of differing sizes to form one immense cosmos of wood producing textures, apertures and stalactites. Openings in the vaulted top let in just enough natural light to create the dappled light effect of a forest canopy.”

As described by Situations: “From the oldest tree in the world to some of the youngest and near-extinct species, the tree samples contain within them stories of the planet’s history and evolution through time. From the Indian Banyan Tree, under which Buddha achieved enlightenment, to the Japanese Ginkgo tree in Hiroshima, a tree that witnessed and survived one of the darkest moments of human history.” Tree species in the project came from a diversity of sources, including Yakushima, Japan, the White Mountains of California, and donations from the Herbario Nacional de México, Royal Botanic Gardens, Kew, Kyoto University, the Arnold Arboretum at Harvard, and many others.

“Some samples are incredibly rare,” says artist Katie Paterson. “[There are] fossils of unfathomable age, and fantastical trees such as Cedar of Lebanon, the Phoenix Palm, and the Methuselah tree, thought to be one of the oldest trees in the World at 4,847 years of age, as well as a railroad tie taken from the Panama Canal Railway, which claimed the lives of between 5,000 to 10,000 workers over its 50 year construction, and wood is salvaged from the remnants of the iconic Atlantic City boardwalk devastated by Hurricane Sandy in 2012.”

Like an expose of all the world’s forests, the project recalls Thomas Heatherwick’s Seed Cathedral at the 2010 Shanghai World Expo, in its review of history at a microcosmic scale. The exterior cluster-like appearance of the installation is meant to evoke a forest canopy ecosystem, with the Douglas Fir posts reflecting trees of varying height and development, while the interior contains specimens from the earliest forests, available only as petrified wood fossils, up to the most recent emergent species. 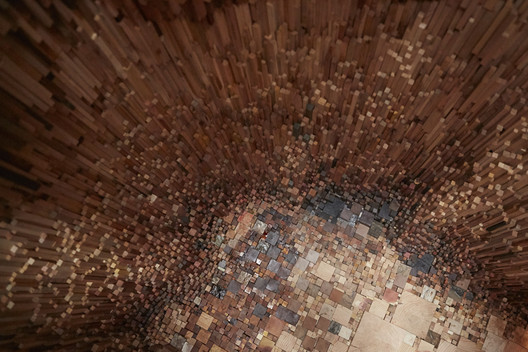