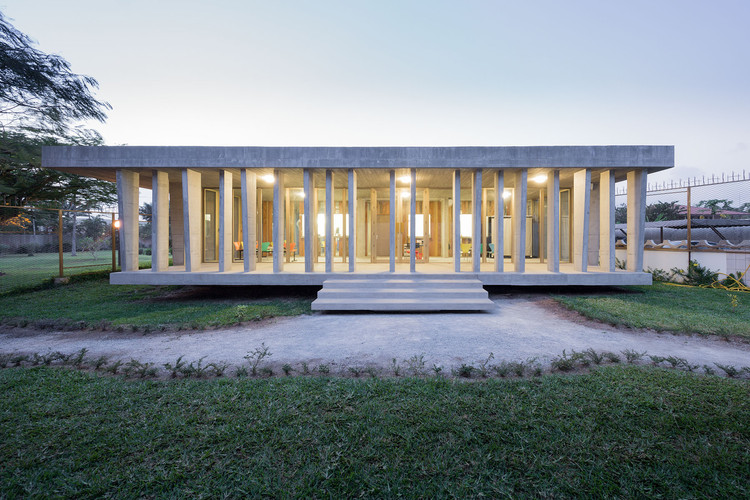 Text description provided by the architects. Until the summer of 2015, the Swiss Confederation was represented in Côte d’Ivoire by an embassy located in Abidjan’s Plateau district, in an upper storey of an office building. And then in 2013 the Office Fédéral des Constructions et de la Logistique (OFCL – Swiss Federal Office for Buildings and Logistics) decided to acquire the former residence of the Norwegian ambassador in the city’s attractive Cocody district, planning to renovate and extend the existing building in order to house its new embassy there.

The building stands on a generous plot with magnificent trees. The existing villa, dating from the 1960s, was sturdy and well laid-out, its horizontal design divided into regular structural units and opening onto the grounds. The project therefore involved converting a private residence into a workplace fulfilling a representative function, one that would host the Swiss Federal Department of Foreign Affairs mission, with its diplomatic and consular sections, as well as an office of the Swiss Agency for Development and Cooperation (SDC).

The new building needed to fulfil the following four objectives: to ensure that the embassy could function effectively in its new setting; to respect the site and the existing villa; to take the specific local climate conditions of Côte d’Ivoire into account; and, finally, to embody Swiss values.

The major intervention involved extending the villa on the street side by adding a new “public” building which houses the consular section, where visas are handled.

The new building expands the original villa by extending its horizontal roof, creating a new public façade which is raised above ground level and accessed via a broad stairway. The roof slab rests on concrete pillars – irregularly spaced and set at various angles. As visitors ascend the stairway they are welcomed by a wide external covered gallery. This space acts as a shaded waiting area and also protects the glazed façade from bad weather.

The elongated reception hall has counters dedicated to handling visa applications, enquiries from Swiss citizens and other consular matters. The space opens onto the building entrance and the greenery of the embassy gardens. Four counters are set into the back wall, which is lined with strips of Ivorian wood, of various different species, alternating with vertical mirror strips which reflect the garden outside.

AN IMAGE OF SWITZERLAND

The new public façade is intended to reflect Switzerland’s strength and diversity – the strength of a country that enjoys tremendous political and economic stability. The pillars convey a sense of discipline and suggest security. Their slightly angled forms, with edges tilted towards the visitor, express an element of movement within the system, a welcoming generosity which accommodates diversity. The vertical lines are offset by the slanting surfaces.

The raw concrete of the construction echoes Abidjan’s magnificent modernist architectural heritage, built during the 1960s and 1970s, and harmonises with the original villa, also from this period. The power of the concrete and the sensuality of the formwork timbers, imprinted in the concrete, are qualities this design seeks to celebrate and re-establish in the local Côte d’Ivoire context. As well as paying homage to the majestic buildings of the recent past, the use of this material is also adapted to local resources (gravel, sand, cement and formwork timber), reducing the quantity of materials to be imported.

The new counter wall plays a key role in the design – the interface between the consular staff and local citizens or Swiss residents. It evokes the exchanges between the two countries, both cultural and economic, by juxtaposing strips of Ivorian wood with mirrors reflecting the garden around the glazed counter desks. 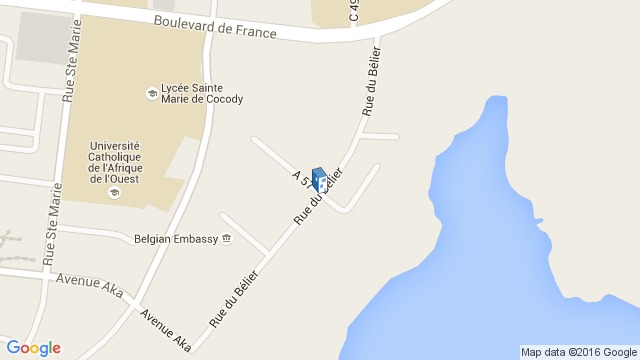 Location to be used only as a reference. It could indicate city/country but not exact address.
Share
Or
Copy
About this office
LOCALARCHITECTURE
Office
••• 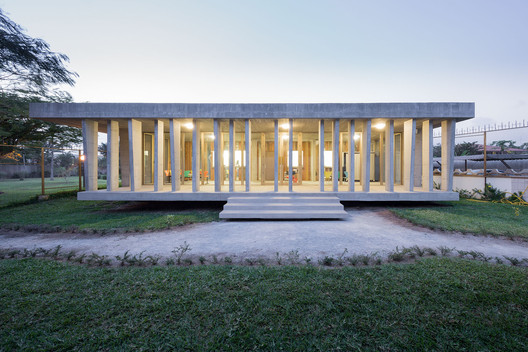