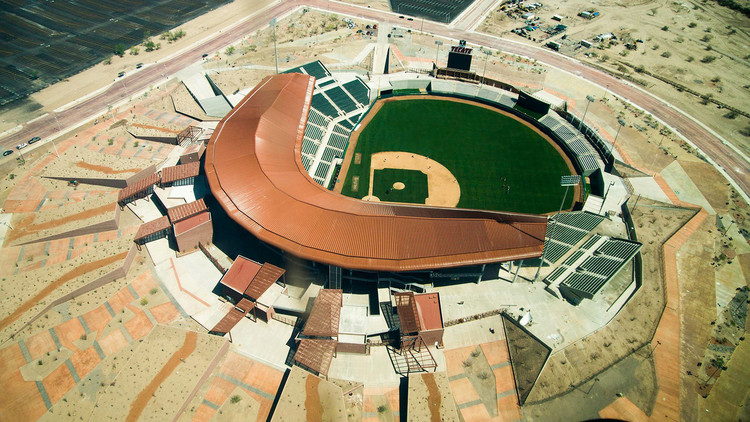 Text description provided by the architects. Sonora Stadium is distinguished as an iconographic element of the region representing El Colorado crater, located in the Biosphere Reserve 'El Pinacate', with the strength necessary to make Sonora Stadium an element of identity for the city and its habitants. It is the first building and main trigger for the new urban development 'Puerta Oeste' in the city of Hermosillo.

The stadium has been designed with the quality standards of major leagues, and during its creative process it was approved by the board of the Arizona Diamond Backs and representatives of MLB. The interior structure of the playing field has been designed, built and supervised in accordance with international standards and high-tech materials under the surface of the field. Sand, gravel, clay, grass, drains, irrigation and a precise tracing on its slopes and surfaces create the ideal conditions for the sport of baseball at the highest level.

Sonora stadium is located at the western gate of the city of Hermosillo, Sonora. The building has a capacity for 16,000 spectators with full accessibility for people with special needs, polypropylene seats, high-strength aluminum seats on bleachers and a design of flows and directions that allow evacuation in approximately 15 minutes on average.

Thanks to these characteristics, Sonora Stadium has the capacity for international events such as the Caribbean Series, the World Baseball Classic or to receive major league teams in exhibition games. Sonora Stadium is the first new generation ballpark in the country, with features that give it an international quality.

The building is defined by a single envelope gesture that builds the geometry of the stadium from the base, housing the playing field which is bound by a perimeter of slopes arising from the ground. These build the interiors of the stadium accompanied by a landscape architecture that outlines the environment between volumes, creating access and pedestrian paths that lead into the building.

As a result of its design, Sonora Stadium allows complete visibility to the field from the lobby level, so that upon entering or moving inside, one can monitor the action and development of the game at all times.

The main building features private suites and an events area from where one can see the skyline of the city on the horizon. In the basement, the clubhouse of the local team is fully equipped with areas for rest, recreation, massage, lockers, gym, batting tunnel, services, parking and the press.

Its technological equipment includes a LED screen of 17 x 14 meters, MUSCO system in the 6 lighting towers, safety and sound circuit with a peripheral surround system capacity, cabins for media streaming and camera location according to international standards. 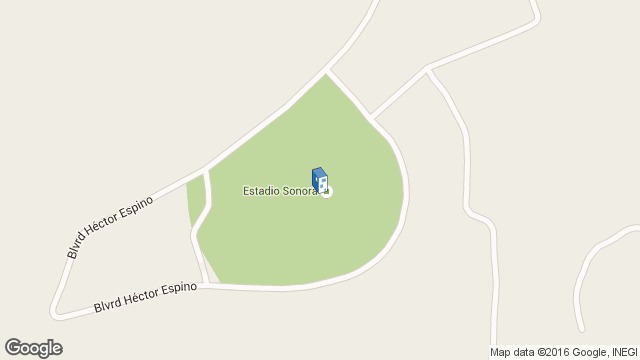 Location to be used only as a reference. It could indicate city/country but not exact address.
Share
Or
Copy
About this office
3Arquitectura
Office
••• 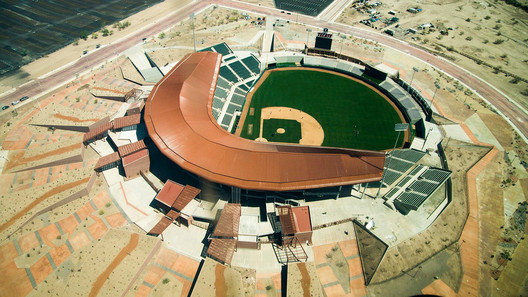