Save
Antidote to Modernism: Feifei Feng's Bespoke Intervention on Slab Housing in Jinan 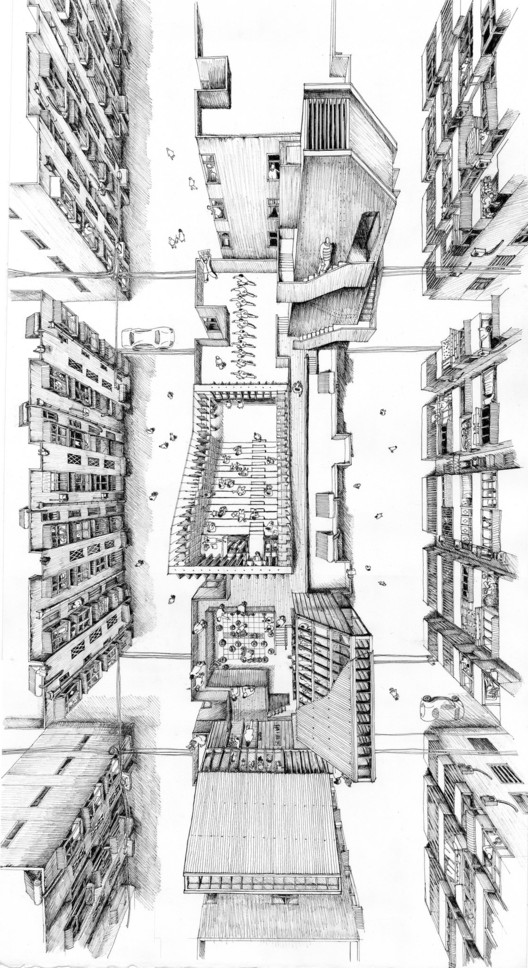 A city of over six million (according to 2010 census figures), Jinan is the capital of the Shandong province, and located near the halfway point between Beijing and Shanghai. Like most cities of China’s industrialized coast, Jinan’s population has grown exponentially since the mid-twentieth century. To accommodate such growth, Feng explains how changing urban strategies altered the plan of Jinan’s streets and its architecture. What began as irregular grids of courtyard housing in the years 1100 BC - 1900 AD evolved into larger multi-story commercial buildings during the period of foreign concessions (1900-1949), and then into long socialist-style slab structures (1949-1978), and finally into the highrise superblocks that have characterized economic reform China (1978 - Present). Contextualizing these changes Feng explains how local cultures and traditions have been lost in the dramatic urban push. The proposed follies seek to reinstate some of the characteristic elements to urban life in Jinan:

By blurring the boundaries between public and private, actors and spectators, life and art, the drama is an exploration of “a theater without theater,” an on-going pursuit of avant-garde theaters that call for a collective creation.

The old city of Jinan, often referred to as the “City of Springs,” had a prominent water culture rooted in the city’s adjacency to rich underground springs. Three of Feng’s acts seek to reactivate this tradition: “Spring Water Collection,” “Humming Chamber,” and “Outdoor Water Show.” The first proposes a water collection tower between two apartment buildings, that intends to reinstate a daily ritual of securing water with a bucket at a spring. The Humming Chamber attempts to reinvigorate a communal bathing culture by implementing a pair of protruding, conically-shaped pagodas with pools at their base, and balconies that connect to the adjacent housing blocks. Outdoor Water Show looks to a tradition of water play and exercise enabled by the local springs, creating a pool between housing blocks and adding diving boards of various heights onto the existing circulation, in order to add relaxation and recreation to the complex. While collecting water with buckets may be a novelty, using water to reconnect with the region’s inherent geology calls attention to the fundamental failings of modernism and its goals to exist abstracted from nature.

While the other four acts are less explicitly linked to the city of Jinan, they also address the need to add sociability through spaces of converging interests by correcting more general pitfalls of housing blocks. The “Senior Sky Stage” is a moveable room inserted into one of the housing slabs that moves like an elevator, offering access from common areas on different floors of the building. Feng suggests it could be used for concerts or tai chi, and points out the possibility for businesses to use adjacent space for commercial functions, like a barbershop or massage parlor. “Cloud Commune” is a series of follies on one of the building roofs, including the Yin-Yang Library, a debate terrace, and a recitation tower for solitude and reflection. For children, the “A-Maze” act as a sort of vertical playground. “[Kids] step up ladders, slide, climb rocks, walk like crabs, pull themselves up a rope, sometimes fall, go through obstacles, hike, play Spider Man, crawl, play King Kong, and perform their own shows.” The final act, a “Ribbon Runway,” zigzags between two of the slabs and can be used for fashion shows, but also has the practical implication of connecting two of the neighboring buildings at multiple levels.

In Feng’s proposal the follies act as bespoke antidotes to the pervasive sameness of Jinan’s housing blocks, and each "act" is complemented by anecdotes and meticulous pen-drawings. While it could be argued that the design offers only superficial responses to large-scale issues, the real problem is rooted in the politics that have abstracted the altruisms of Modernism into cheap, uninspired uniformity that merely creates volumes for people to inhabit.

Feng sets out to restore the elements of sociability and happenstance that have organically drawn people to cities in the first place. It is a sad truism that calling on architects, rather than developers, for large-scale acts of urbanism would allow for socially-cognizant thinkers like Feng to incorporate her civic-minded ideas into initial designs. As it is, Feng’s follies restructure the tedium of Modernism by establishing new junctions between housing density and sociability and prospective living with tradition.