“Next Tokyo” envisions an infrastructural network that stretches across the bay, acting as reclaimed land to buffer Tokyo's shoreline. Island clusters function as the foundations for high-density developments and accommodate a half-million residents who are seeking to leave at-risk coastal regions and reduce their commute times.

Water-filled infrastructural rings allow for the sharing of resources such as freshwater reservoirs, public beach harbors, and urban farming plots. Saline water from the bay will also be retained to grow algae, which is a rapidly renewable and efficient clean fuel source.

A key component of the masterplan is the construction of a mile-high residential skyscraper, which was approached as a “logical response to a confluence of urban and environmental conditions.” A mile-high tower comes with many engineering challenges, one of them being pumping and distributing water to its residents. This problem was addressed by designing the facade to collect, treat, and store water at various levels in the tower, and relying on gravity for distribution.

As the global population continues to concentrate in urban areas -- many of which are situated near bodies of water -- “Next Tokyo” will represent a coastal mega-city that is more resilient to environmental change.

Learn more about the Next Tokyo proposal here. 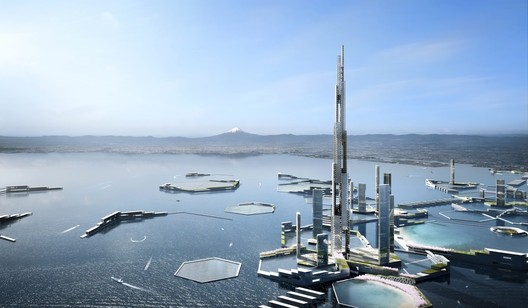