What if a power plant could also be a home, an office, or even a park? That is the question behind Cypher CO2ling Plant, a conceptual design developed by Kawan Golmohamadi, Shilan Golmohamadi, and Soad Moarefi. Power plants are a ubiquitous and inevitable byproduct of modern lifestyles, but they are typically located in remote areas, far from where the power is actually needed, due to their unsightly appearance and the emissions associated with combustion-fueled energy generation. Cypher CO2ling Plant proposes an alternative scenario that utilizes the infrastructure of the power plant’s cooling towers to support mixed-use development, while also mitigating the less desirable aspects of energy generation. 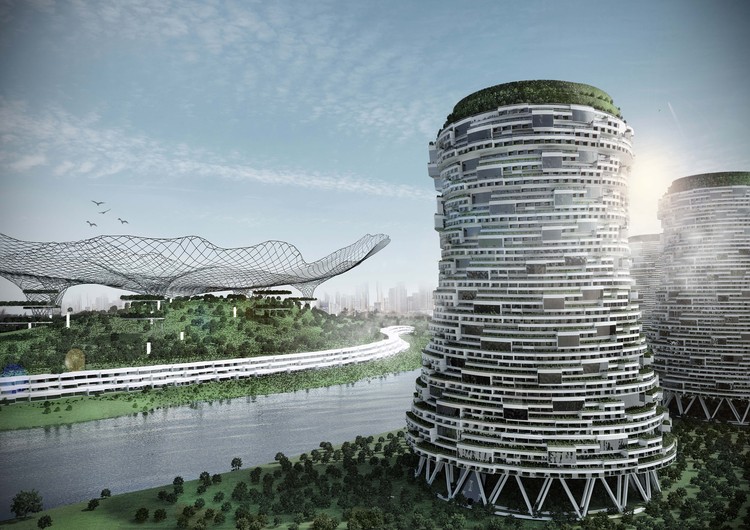 All thermal power plants generate waste heat that must be rejected to allow effective operation. At many large plants, heat rejection is handled through large cooling towers using evaporative cooling. Massive concrete hyperboloid cooling towers form the backbone of the Cypher CO2ling Plant proposal. These towers can be as large as 200 meters high, approximately as tall as a 60-story building, and since their function is purely dedicated to exhausting waste heat, they are physically separated from the actual power generation.

The Cypher CO2ling Plant proposal seeks to generate efficiencies by integrating habitable space into the cooling tower structure. Embedding housing or commercial spaces on the exterior surfaces of the towers reduces the use of building materials and lowers construction costs compared to providing separate structures. In addition, the waste heat in the cooling towers can be utilized to heat the habitable spaces during winter months, and the proximity to the power generation reduces the transmission losses generally associated with transferring electricity across long distances. The mixed-use nature of the buildings also provides living and working spaces in close proximity, reducing the need for automobile transportation.

To address the remainder of the power plant, Cypher CO2ling Plant proposes burying the actual generation functions underground, replacing the noise and visual pollution with a landscaped hill. The only part of the plant that rises out of the hill would be the tops of the chimneys, surrounded by a space frame structure filled with trees and plants that filter the CO2 and pollutants generated in the combustion process.

The design team envisions their proposal as an innovative and sustainable solution, integrating previously undesirable elements into a functional, mixed-use urban setting with abundant green space, and capitalizing on the resulting efficiencies. Power generation continues to be a controversial and challenging subject, with pollutants and greenhouse gases generated by fossil-fuel combustion, safety concerns surrounding nuclear energy, and the comparatively high first-costs of renewables. Although the designers may not have fully addressed the inherent environmental problems of fossil-fuel power generation, especially greenhouse gas emissions and particulate air pollution, the Cypher CO2ling Plant proposal presents a compelling model of combining disparate functions with synergistic results­­–a model that will find increasing relevance in our rapidly urbanizing world.