Save
The Best Architecture Drawings of 2015
Share
Or
Copy

We believe good projects should be able to express and explain themselves. Architectural representation plays a fundamental role in how a project is perceived by the audience, which is why today ArchDaily is recognizing the most outstanding, original and self explanatory drawings of the year.

The selected drawings cover the diverse range of different techniques used in architectural representation today, from hand drawing images to perfectly detailed axonometrics and animated GIFs - but one thing they all have in common is the deep insights they provide into the appearance, construction or concept of the buildings they represent.

Lifelike architectural representation, as we know it today, stems from Greco-Roman schematic representation, which was based on careful observation of natural forms. In the centuries after the fall of the Roman Empire architectural drawing fell into decline as architects worked more as craftsmen, developing designs as they worked and passing architectural knowledge on through apprenticeships rather than physical records.

In the Renaissance, however, the techniques of the ancient civilizations were rediscovered and refined. Just as mathematical perspective and other theories of representation made Renaissance art increasingly realistic, architectural drawing also became increasingly sophisticated, and this period cemented conventions for architectural drawings that we still recognize today.

In the early 1900s, the work of Frank Lloyd Wright, curated by the publisher Ernst Wasmuth, was displayed in Berlin, setting a new precedent for architectural representation. The most interesting thing about the Wasmuth Portfolio is the simplicity of Wright’s drawings, which use simple lines and flat colors due to the impossibility of representing the works in their true colors. The synthetic representation of Wright's work had a tremendous influence on the European architectural avant-garde, inspiring, among others, Mies Van der Rohe.

In the 1960s, architectural representation again followed trends in the art world, as groups such as Archigram, Archizoom and Superstudio created Pop-Art inspired architectural collages which showed their designs as part of a wider cultural milieu of images and ideas.

The debate between hand-drawing and digital representation remains open, and every author must choose the method that best suits their mental process of the conception of architectural spaces in order to explain their project best and capture the art within it - a principle exemplified by the following drawings. 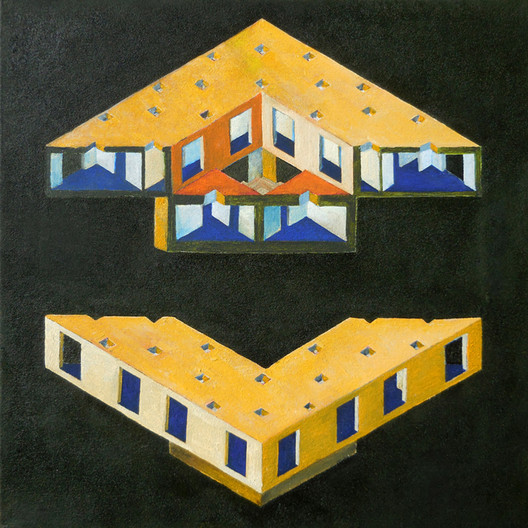