The house occupies a modest floor area, approximately half of a garden in the open space between the back of houses on Forth Street and the gable end of houses on Hart St. The junction between these two streets is an unplanned part of the New Town where two estates meet, with an unsightly gable end to the west side of Hart Street. The design needed to resolve  the issues of space, become a ‘bookend’ to the gable end and allow contemporary design within a World Heritage Site, with its front façade continuing the stonework pattern of the adjacent street façades.

There are a number of agendas at work.  Firstly, although it is a modest floor area of 165 m2 on a footprint of only 11 metre x 6 metre, (formerly part of a garden to a basement apartment on the adjacent Forth Street), it contains three bedrooms, a living/dining/kitchen area at varying levels, study, basement storage, garage, utility room and roof terrace.

Secondly, it is an essay in how contemporary design might contribute to a particular place in the New Town, which historically is an unresolved corner of typical New Town planning.  The adjacent gable end should never normally have been exposed and the house deliberately has become a “bookend” to it, with its front façade continuing the stonework pattern of the adjacent street façades. The stone has been concentrated to either end of the elevation acting as “bookends” to the more delicate elements in the centre, but with a slightly recessed element of stone placed centrally.

The stone itself remains divided into striated ashlar below and smooth ashlar above. There are little corner windows which pick up and reinterpret the idea of coin stones and these are co-ordinated with a bookcase internally. This idea continues onto the northern elevation to Hart Street lane.

The central section consists of glass block and timber garage door at ground floor level, a sliding window, stone cladding  and movable louvres. The gable end is  a triangular element floating over a horizontal window. The triangular section is clad in louvres with a background of lead and glazing. Thirdly, the house had to be careful to preserve the privacy and views of the sky from the adjacent apartment and this contributed to the bookend section.

And, finally, there is a very strong energy agenda in the new house.  The roof consists of photovoltaic cells and substantial south-facing glazing.  Underneath this are mechanised insulated shutters allowing the glass to generate heat when open but preventing it radiating heat when closed.  A computerised internal air circulation system takes warm air from the top of the house to the basement via a gravel rock store to produce a delayed heat source for evening use.  The main heating source for the house is a 150 metres deep ground source borehole connecting to a heat exchanger which feeds under-floor heating. There is no gas in the house. All the major windows to the house have insulated shutters.  Rainwater which follows a course of pools and waterfalls on the roof terrace finds it way to grey-water storage tanks in the basement and is then used to flush toilets.  Those tanks also supply a sprinkler system.  Heat is also extracted from the flue of a log burning stove to pre-heat hot water.

There are many architectural influences at work.  Not least is the work of Carlo Scarpa, on whom Richard Murphy is an authority. The roof terrace is a homage to the garden of the Querini Stampalia in Venice using the same exposed aggregate walls and sourcing tiles from Scarpa’s original manufacturer in Venice.  Internally, the Venetian “stucco lucido” coloured plasterwork is used extensively. The Sir John Soane Museum and the Maison de Verre are also great influences in the use of illusion and moving elements.  Reitveld’s Schroder house makes an appearance in a “disappearing corner” stone panel opening, designed to be the same proportions as his famous window.

The design was recommended refusal by Edinburgh City Council Planning Department but in a highly unusual decision, Councillors voted 9 to 4 to reject the advice of the planners and to allow construction to go ahead. 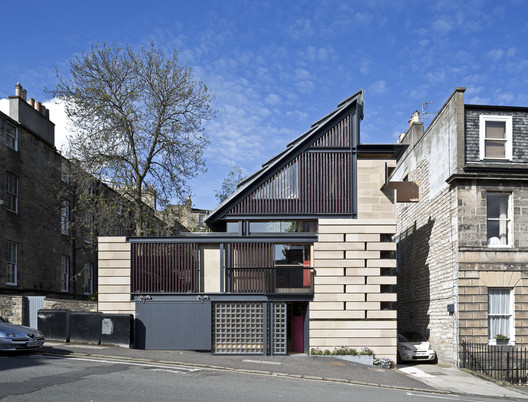