In the classic film The Wizard of Oz, Dorothy and friends manage to obtain a visit with the great and powerful wizard, who appears to them as an enormous, grotesque head, surrounded by smoke and flames, with a booming voice and a hostile demeanor. But when Toto pulls back the curtain, the wizard’s true nature is revealed, and it is only then that he is able to help the gang get the help for which they journeyed many miles down the yellow brick road. In architecture today, suburban houses share many of the characteristics of the wizard’s illusion: large, stand-offish and intimidating. But what if there is a more benevolent architecture hidden behind the smoke and flames? This is the thesis of Australian firm Otherothers' Offset House, on display now at the Chicago Architecture Biennale. 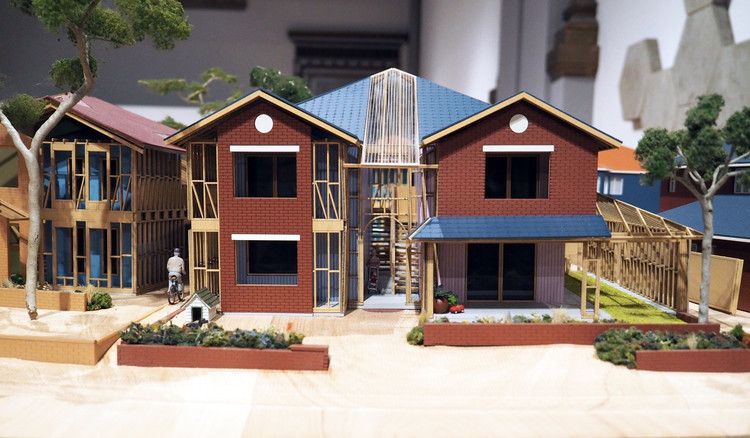 Large suburban homes, often referred to as a McMansions, are often designed to be as large and decorated as possible for the homeowner’s budget. Ornate porticos, brick veneers, and cornices attempt to give the home a faux-palatial feel, even though the function of the building consists simply of providing for a middle-class nuclear family. But according to Otherothers, look below the gingerbread adornment and you’ll find “Modernism’s most successful and longest-running project”: balloon-frame timber construction, invented in 19th Century Chicago to make housing simple, fast and widely accessible. “Seen silhouetted against the sky, before cladding is applied and fences erected, the naked timber frame is a thing of elemental beauty, a lacework diagram of infinite potential,” they say. “Simply put, the frame is architecture.”

Otherothers reveals these frames by pulling back the enclosed spaces from the houses’ exoskeletons, creating verandas and transformable outdoor shared spaces from what were once oversized, underutilized rooms. Fences around backyards have been removed, initiating a dialogue of local community.

Privacy is maintained through the overhangs and permeable screens created with the offset. These shared outdoor spaces define a new typology for the suburban neighborhood, a semi-private buffer that blurs the harsh threshold between the communal and cloistered. The verandas call to mind the large wraparound porches of the American South, whose screens provided residents with the choice to interact with passersby or simply sit as voyeurs of community life. As explained by Otherothers:

“Vestigial space between houses is consolidated into a shared commons, providing space for gardening, recreation and play, and reorienting the block away from the road. The cyclical renewal of suburban houses promises to reinvigorate moribund outer suburbs, allowing for generational and cultural change.”

The vestigial spaces act as an independent zone between the dermal layers, a phenomenon referred to by Robert Venturi in Complexity and Contradiction as “loose skin.” With this buffer, the two layers can be expressed with individual language, while synchronizing at key points to provide effective daylight and for entry.

By reinventing the interior spaces within its existing shell, Otherothers have perhaps created what Joshua Comaroff and Ker-Shing Ong refer to in their book Horror in Architecture as a “Trojan Horse,” a categorization that can be spotted when “a dissociation or rift occurs between the contents of a building and its expression.” Many examples of this phenomenon exist in architectural history, such as Charles Garnier’s Paris Opera (1875), where a series of grand domes and vaulted spaces are encapsulated under what is essentially a shed roof, revealing little of the form of the spaces waiting within. Similarly, on first glance, Otherothers' Offset House may appear as just an aesthetically doctored suburban home, but look deeper, and the true architecture reveals itself.

The issue of suburban sprawl is one that has plagued Australia perhaps more than any of nation, the United States included. The harsh interior landscape of the island ensures rural areas are sparsely populated, yet fewer than 10% of the country’s residents live within close proximity to a city center, leaving the majority of the population corralled in the suburban in-between. As Otherother explain:

“Suburbia is not just home for most Australians: it is the primary domain of social exchange, cultural relations and political discourse. In his influential 1960 book Australian Ugliness, Robin Boyd equated the brick-veneer suburban house with the nation’s racist White Australia policy. More recently, Pritzker Prize-winning architect Glenn Murcutt claimed that suburban houses are “not architecture.” But if the language of the McMansion is merely a veneer, shouldn’t Australian architects see right through it?”

Good architecture can be hard to find within the vast sprawling neighborhoods of the suburban landscape. But as Otherothers’ Offset House shows, perhaps the key to reinvigorating our neighborhoods is to remove the grotesque illusions of grandeur, giving the curtains obscuring our homes one strong tug. Architecture may have been hiding there all along.