Rotterdam will soon have a new cabinet of curiosities to add to its collection of architectural icons. For many years the city's Museum Boijmans van Beuningen, originally established in 1849, has required a safer space to house its world-class collection of painting, sculpture and prints – a collection which is said to have a total value of €7billion ($7.5billion). Last week the Municipality of Rotterdam voted in favour of the building’s construction and, with zoning approved, "the world’s first fully accessible art storage facility" is now slated to open its doors in 2018.

With groundwater seeping into their frequently flooded subterranean storage spaces, and priceless artworks separated from the rising damp by wooden pallets alone, the Boijman's plans for a new permanent storage facility gained urgency in 2013. That year, a city-organised international competition attracted proposals from Koen van Velsen, Harry Gugger Studio in partnership with Barcode Architects, Neutelings Riedijk, and NIO architecten in partnership with MAD and OKRA.

MVRDV were "initially disqualified from the competition following an alleged breach of tender regulations." It transpired that Sjarel Ex, Director of the Boijmans and a member of the jury, had been in conversation with Winy Maas (one of the practice's three directors) during the competition phase. Maas objected to the ruling and, following an inquiry by Rotterdam’s Court of Justice, the practice was cleared of the accusations and allowed to compete.

In 2014, having won the competition, MVRDV unveiled designs for the Boijman's new 'public art depot', which would sit adjacent to the institution in Museumpark – the city's cultural heart masterplanned by OMA and Yves Brunier in 1994. Its proposed location proved controversial. Petra Blaisse, a landscape architect and longtime collaborator of Rem Koolhaas who was involved in the original masterplan, spoke out to argue that "if I were the Boijmans and the municipality I'd reduce the building and completely re-design it."

Yet the building’s design, MVRDV claims, is in harmony with the arrangement of the existing public space. In their words, it is "a compact round volume with a small footprint [...] in order to spare the park." Its reflective glass façade, seen by many critics as the most overpowering and technically dubious aspect of the building's appearance will, in the designers' minds, actually "make the building less visible." To appease naysayers the practice have added the caveat that, where needed, "the [building’s] reflection will be lesser for transparency and to avoid unwanted light effects" lest they follow in the footprints of London's 20 Fenchurch Street which, as a result of poor design, was labelled as the 'walkie-scorchie'.

In an opinion piece by Maurice Blokhuis for Dafne (which, to maintain transparency, is an online magazine whose editor-in-chief also directs PR and business development at MVRDV) the controversies have been summarised. It first reports that according to a recent city-led poll around 60% of residents are in favour of the building and 20% are against. Secondly, among the neighbours of the depot, one of which is the Nieuwe Instituut (formerly the Netherlands Architecture Institute), the Erasmus Medical Centre are concerned that the building's reflective facade will cause aggravation for patients and the children’s ward in particular. Finally, and perhaps most surprisingly, during a formal hearing the city's "business community was [on the whole] pleading in favour of the building, [while] the cultural institutions [were speaking] against it."

MVRDV's plan is for a new type of collection building: one that will simultaneously act as an archive and a gallery. A public route will "zigzag through the building" from the ground-floor lobby to a sculpture garden and restaurant on the roof. The disc-shaped roof space will afford views of the city and house Futuro, the "UFO-shaped" house designed by the Finnish architect Matti Suuronen. As it ascends, this route will "pass along and through art depots and restoration workshops," allowing for an ever-changing display determined by the position of movable storage racks and programmed by the museum's curators.

As an archive, the building will also have spaces inaccessible to the general public. There will, for example, be rooms for private art collections in which proprietors can view their property in "spaces comparable to the art-equivalent of a sky box." To counter the commercial overtones of this new venture, the depot will also accommodate an office for the philanthropic De Verre Bergen foundation.

Watch a fly-through of the building's internal spaces: 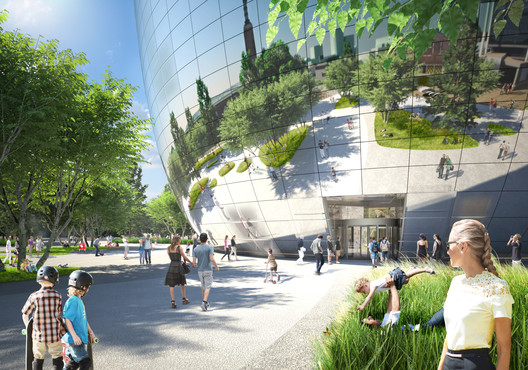