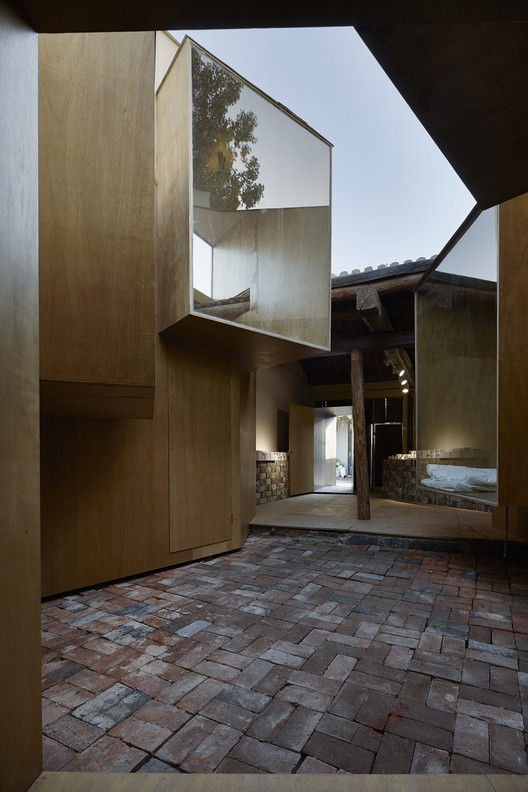 Micro-Hutong is a building experiment by Zhang Ke’s standardarchitecture team on the Yang-Mei-Zhu street of Dashilar area. The goal of the project is to search for possibilities of creating ultra-small scale social housing within the limitations of super-tight traditional hutong spaces of Beijing.

Located in the Dashilar District, a historical area within walking distance of Tiananmen Square, standardarchitecture has designed a 30-square meter Micro-Hutong that offers a new alternative to Hutong preservation and actualization.

A critical look into the dynamics of the hutong reveals that even with the menacing grip of unscrupulous real estate development, the most critical problem of the hutong consists of the relentless exodus of its occupants. Concerned with the lack of facilities and the absence of quality communal space, they decide to sell and move out to bigger apartments outside of the city centre. This constant desertion of the traditional dweller of the hutong from the heart of Beijing prompted to generate a strategy able to challenge the growing disinterest of the hutong tenant in order to keep alive valuable living traditions.

The result is an architectural operation that brings back the courtyard as a generator of program, as it activates the building by creating a direct relationship with its urban context, drawing to its interior social activities. Apart from enhancing the flow of air and light, the courtyard creates a direct relationship between the living space contained in the dynamic volumes and an urban vestibule in the front part of the building. This flexible urban living room acts as a transition zone from the private rooms to the street, while serving as a semi-public space to be used by both the inhabitants of the Micro-Hutong and the neighbors of the community.

The Micro-Hutong inherits the intimate scale of the traditional hutong, revitalizing its social condensing capabilities, while enhancing it with spatial improvements. Its light-steel structure and plywood panel cladding allows for low-cost construction, while creating new possible reconfigurations for the future of the Hutong in Beijing.