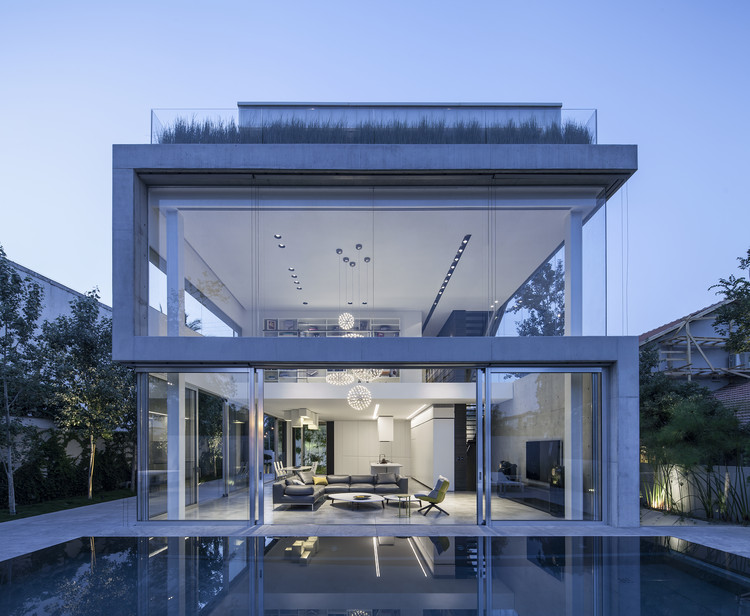 Text description provided by the architects. The creation of a line, this birth of the visual act, has been a meeting point throughout history of art, science and technology­ from the dawn of writing to the abstractness of cave drawings and the penning of mathematical formulas ­ all of them make use of graphics to express a novel idea. A line on a dark background­ short or long, thin or thick ­ sometimes­ expresses orientation or movement, at times convergence or divergence, pain and freedom, connection or physical repulsion. It is one of the most fascinating of its properties ­ that the very border, which a line draws also permanently breaks worlds in two. A single lines simultaneously divides and connects separate worlds­ each one onto himself.

Viewed from the front it looks like a monolithic operation of materials with a deep, monochromatic range of colors. Three rectangular prisms, lain upon one another, into a peaceful composition, stable and subdued, appearing as heavy masses.

A second, discerning glance reveals a dramatic encounter of materials taken from two separate worlds ­ poured, massive concrete and glass panels, creating a semitransparent wall with a decisive line running through it.

The variations of opaque glass yields a colossal appearance of yet more concreteness unifying the building’s construction­ yet still natural. The glass acts to embrace the light ­ allowing it to pour in, controlling its every move. Thus a screen of light is rendered in the most literal way­ a receptive canvas of variation, deep and dynamic, adapting to those who pass through its rays of light.

Within the remaining glass of the structure­ the line returns with the force of a quill­ emphasizing the movements of the eastern facade, painting an exposed, clear slice withing the southern facade in which the utilization of transparent windows has been executed. Thus while the front facade is an abstract creation conceptually assuring the blending of identity and function, the rear facade graphically expresses three­dimensionality, the probing of depth and the feeling of brightness and freedom.

A glance at the side facades explains the process of exposure and illumination beginning at the opaque facade facing the road and leading to the facades facing the yard and pool. A gradient of inter­changing levels of transparency between characteristically different facades made of the same foundation stones.

The entrance to the home occurs on the western side at the patio garden starting from the basement leading to the living rooms, accompanying visitors by degrees from the outer to the inner worlds.

Two yards run along the children’s quarters, one is a patio ascending to the entrance and the other runs along the eastern side providing light, air, and an abundance of privacy. The function of the floor­ corners for sitting, a private yard, and personal gym­ attest to the private world of children.

The design of the space and their dispersal upon four planes creates in each one a sense of maximal privacy and although none is entirely exposed each of them comfortably access the exterior. Thus a structure of concrete and glass of various transparencies is created, the materials stray between one another as the visitor strays between the structure itself. 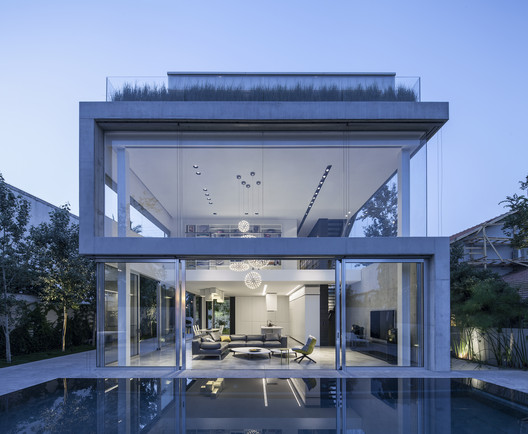