✕
Save
House on the Stream Morella / Andrea Oliva 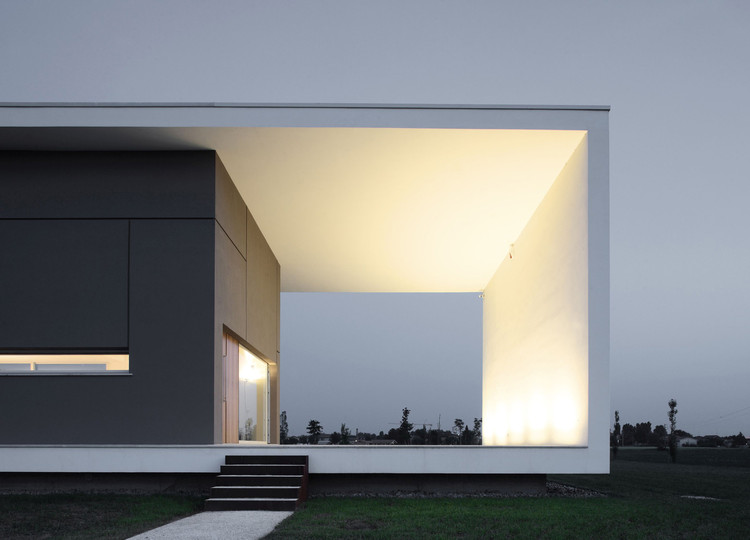 Text description provided by the architects. To the borders of the country of Castelnovo Sotto, beetween the stream Morella and a roman road, in a landscape context characterized from channels, ditches, rows, shrubby stains, gardens, villas and agricultural houses it places the "House on the Morella".

Its typological value is defined by its relationship with the road and as an integral part of the landscape; this is achieved through the enhancement of internal and external viewpoints and through the interaction between solids and voids (porches and windows). The relationships between architecture and landscape, closeness and distance, public and private and the observer and the observatory are also considered.

Inserted between rural landscape and observer to 60mt from the road, suspended by the ground to protection of the tall stratum of superficial wather and to memory of the installations “terramare”, the residence is composed of two staggered elements to northeast: the porch or climatic mitigator and the housing space or insulating body.

The large porch also defines the boundary between the house and the countryside. “Independent objects”, such as the staircases and the ramps with the same formal and figurative nature, represent a natural extension of the roads and paths.

The facades are treated with an exterior insulation and finishing system; they are enveloped by the porch and are characterized by solids and voids, thus appearing in relation with the surrounding landscape. On closer inspection, a fine detail of grooves divides the facades into several parts that represent the architectural forms on a more intimate scale. The south facing facade is made up of large darkening sliding panels that can stay open, half closed or completely closed; the panels liven up the building by providing an infinite combination of lines, geometric and poetic relationships, which in turn act as a direct witness of the seasons, of light, of the changing weather and as a symbol of introversion.

With an orientation of 18° toward west the house exploits to the best the natural contributions that, because of the geometry of the porch, of the ample surfaces south glass door and of the flowing obscuring, they anticipate the opening to the "winter sun" and the protection from the "afternoon summer sun." The study about the solar axonometries has allowed, therefore, to opportunely appraise the incidence of the sun on the wrap and get into proportion the fixed screenings of the vertical settis and the horizontal shutters and the mobile screenings of the flowing pannels.

The combination of some characters of the agricultural houses they are proposed through a reason euclidea, that in the key form-function, distills elements as the "porta morta" (passing space in the residence with scope of ventilation), the "sporto di gronda" (coverage's extension for protection of the vertical masonries) and the "portico" (integrated coverage or juxtaposed for the protection of open and external spaces of the building).

The residence has a structure in portant walls (smaller presence of thermal bridges), constituted by bricks with pores, of 38cm, coupled to a layer of coat insulator on the external side of 10cm, the attics are made of tiles and concrete with riddles in reinforced concrete, coibentate and separated while the coverage had a layer of 22cm of isolation, that is coupled to a coverage mantle in corrugate iron, draining, connected to a system that pick up the rain water. The windows are in plywood with low emissive glass and gas argon.

The plant design is integrated with domotic and allows a reduction of the consumptions through the control of the temperature of the single rooms, the predisposition for an efficient job of the great electrical appliances, the automatic turning off of the lights in empty places, the checked generation of warm water for sanitaries and the regulation of the use times for each single instruments.

The heat system is constituted by radiant panels feeded by a low condensation boiler while the sanitary warm water is integrated from panels solar, places on the coverage, where an integrated photovoltaic system for 6kW is in progress of realization. The residence is endowed with a mechanized system for the rycircle of the air, that bring the scheduled consumption for the heating to 5,19kWh / mq.year. 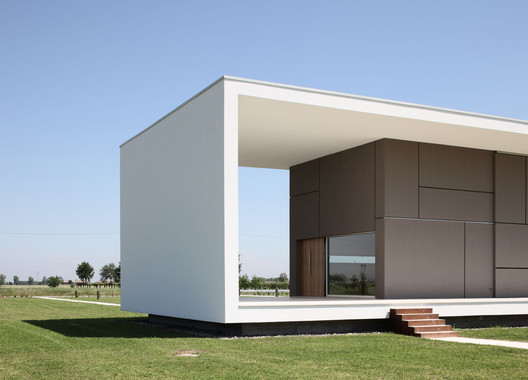 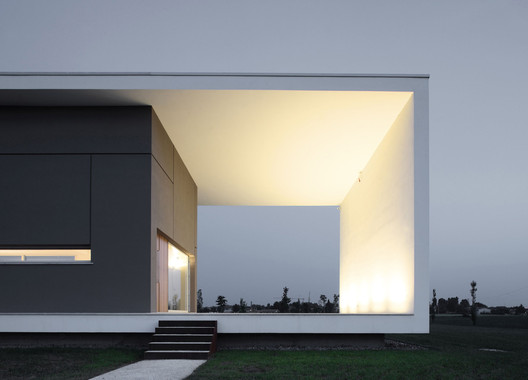