Text description provided by the architects. EASTERN Design Office shared with us their latest project, designed for a very particular client, awaiting for his death.

You can read the complete story behind this project, with photographs by Koichi Torimrua

1. A House of Rising Sun

“A house awaiting death”, the client said to us.

“I will die in 15 years. It will be a house awaiting that death. The building is fine as long as it lasts 15 years. Something small would be good.”

“I have found the place.” A patch of land on a peninsula facing East. “I’m glad the land faces East. I hate the sunset.”

“When I die it won’t be sunset, it will be sunrise. When the final moment comes, I will face the sea and depart on a ship flashing towards death. It’ll be a time revealed after death.”

This is what the client ordered for his house. A view of the magnificent sea in the east where the sun rises. This is the land he chose to live out his final years.

The portion of the sea we have captured encompasses the peninsula that appears on both sides of the site.

A four-meter wide gravel and dirt road runs in front of the site. On the other side of the road is a park-golf course where several elderly neighbors enjoy their leisure time. There is a seashore behind the breakwater wall. If this were a standard house the sea would barely be visible from the site.

The ebb and flow of the tide changes with the seasons and the time, but the distance from the site to the waves is generally about 150 meters.

The height of the floor is nearly 8.6 meters from the horizon and was chosen as the perfect height to view the waves from a sitting position.

The client said to us, “The floor of this house must be raised, so you are the right architects to design such a house.”

On this map the route is a 180 km journey each way. Our chests brimming with anticipation and hope.

The coastline where the site is located is beyond the scope of this round map. This round map encompasses the area of our activity in Japan. This project takes us to a beach beyond sublime Suzuka mountain range, yonder past the ravines of the Ise Penninsula, and exceeds the boundaries of this circle!

Early morning light streams through polygonal windows. With the overlapping windows and accumulation of light and shadow, the entire building erupts in a hymn to the morning.

The distance from the site to the waves is only 150 meters. The breadth of the beach extends for 7 kilometers. The sea is boundless.

What we wanted to capture in this architecture was how to appreciate the appearance of waves. How can architecture showcase the waves and make them appear? It is not just a building with an ocean-view, but a place to observe the ever changing waves.

Waves. This sea is blessed with good waves so even in winter surfers come to enjoy the surf.

"Are you going to live alone?" we asked the client. He said, “Alone. Sometimes I want to call over friends.” Then after returning to solitude, “I want to hear the crash of a wave.”

His request was for a house awaiting death, for the moment when life is extinguished, not the sunset, but the desire to see the sunrise. We always remember the depth of those words that came from a single person.

He wants to anchor his life before he sails away from the sea coast flashing towards an unknown shore. This is the house we are going to design.

How do we interpret his message?

We are not only designing a house, but are creating the port from which his liberated mind will depart across the ocean. This is what our work must encompass.

Therefore, this house sees waves. We want to make you think that the waves part of the interior of the house. It is not simply a house open to the sea. We were not satisfied to design a house with a sea view just because the seacoast is a mere 150 meters away. Ｔhe sea must be incorporated into the open space of the house.

This form draws in waves. This window captures waves. In this house. Waves … are never the same throughout the day…. Opening the doors of this house we are surprised that “Ah, this type of wave appears today.” We designed it this way to appreciate the appearance of waves

How does one see a wave?

It is not a boundless steady blue ocean. The tide, bubbles, and grains of sand are constantly emerging. Unsteady waves, the solitude and calmness of a placeless and solitary man, these are what we want to capture in this new house.

Everyone knows it is not a vague and limitless sea. It is also not an horizon. The sea is “the appearance of waves”.

People want to know the meaning of the sea.

The architecture will reveal this meaning.

The Site is 440 sqm and the Floor space is 73 sqm. It is a house facing the East. The following is a brief list of postures that a person assumes when watching the waves:

Watch the waves while swaying in a rocking chair

Watch the waves to observe them while eating and drinking wine.

Watch the waves and sink into them while sitting on a couch.

Watch the waves alongside your body as you walk around the room.

Watch them while talking and rolling in laughter with friends

These tangible activities and the places they occur governed the form of the architecture. The way to appreciate the appearance of waves can be designed based on this comprehensive drawing of the house. It was drawn in such way.

Yet these are all the same. Waves will penetrate your eyes, chest and shoulders when you are in it.

The plan takes V-shape that will draw the waves. In other word it is expected to open to the waves. Slits are cut on a V-shaped wall. Through the edge of slits, watch and listen to the waves while lying on a wooden lounge or while standing and cooking. (This time we did not incorporate slits on the exterior wall, but use them on a symbolic interior wall.)

This form was born from the client’s request, “When the final moment comes, I will face the sea and depart on a ship flashing towards death”.

You are amongst many suns. The fact is that you cannot go beyond the sea allows you to have an illusion. Symbolizing the spirit of navigability people used to have. To embody such notion, to ease up the fear of death, anchors are set to this architecture.

It was our intention to symbolize an outlaw who has lived a life of relentless rage and a voyage with ready to depart with anchors aweigh.

The disposition of a man who has unfastened an anchor is light. Suppose a dream he dreams is a butterfly. The image of him swinging in the rocking chair shall be deemed as a butterfly.

A blue butterfly is a symbol of the blue ocean. It also symbolizes people going to fly in a free manner. The blue wings of a butterfly were designed into the windows.

The blue we find there is the same blue of the ocean.

It is also a wavering light of the waves which can be seen when looking up the surface of ocean from the bottom of the sea.

Radiant sun rising from the east.

The sea and a butterfly

A man ascending up to the sparkling surface of the sea.

What is the ocean? It is a wave. “When the final moment comes, I will face the rising sun and depart on a ship flashing towards death. At that moment the imaginary sun is not one. There are many suns. In the imaginary world he becomes a butterfly. The blue wings of a butterfly are the waves of a blue ocean. Looking up from the sea floor there is a sparkling ocean. These images are shaped into the form which is fit for a man who lives between the sea and a single room.

･The rocking chair is set at the top of the V point. It is the center of his entire sea.

There are two walls overlapping each other. Two openings are made on them with different shape.

These two overlap each other between the rocking chair and the sea and make into one form.

Like squeezing a wet cloth with both hands, these two different shapes of windows crop the blue seascape. Like a drop of water, waves appear from these different window shapes.

We sometimes still ponder why this client could give us such an request. Is it the death of his friend or is it his underlying nature that had planted him an idea of his house. We do not care whatever underlies in him. There is a fact that we had such an order from him and we have to comply with his message. On this process we find the possibility of architects. There must a form that is embodied by strangers. The two shapes into one form. In the form, everything changes like undulating waves. This is the message of this architecture.

The house built in response to the client’s request, "I want you to build me a house awaiting death” is a house where a new “beginning” can be seen each day. 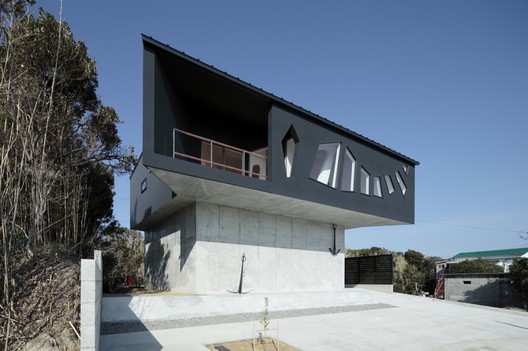