Originally, the house was entered via a dark, stuffy corridor located under a staircase. In its place, a new welcoming entry foyer now opens into a sunlight drenched multi-level void with natural ventilation. Centrally located in the re-planned house, a feature stair climbs & descends between three levels. Landings are large enough to work, play or just hang out on.

Embodied memory & energy lost from the demolished red brick rear facade was fragmented onto the new building envelope. Demolition drawings of the existing rear portion of the house were cut up into equal squares & re-arranged in a surrealist cubomania manner. Tinkering together with the owner produced a resolved floor & facade layout.

The language of the house additions extends into a small child friendly garden filled with productive pockets. Photovoltaic cells, solar hot water & water collection tanks are hidden from view. Whereas on display are the upcycled memories from the old house, contextualised by efficient planning & infused with natural air & sunlight. 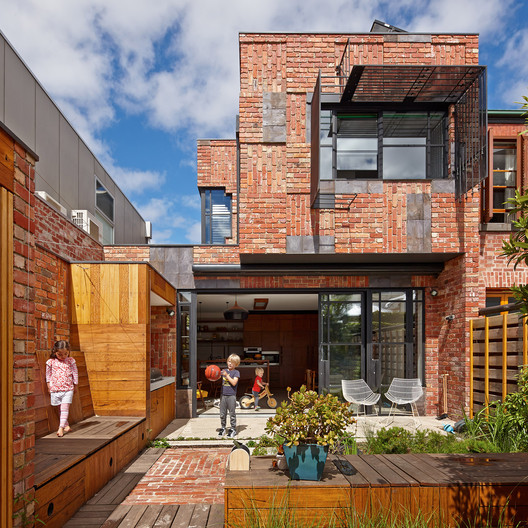