All
Projects
Products
Events
Competitions
Save
House in Itsuura / ADX

Text description provided by the architects. The city of Itsuura, located in the north part of Ibaragi prefecture, has known as a prosperous fishery. Tenshin Okakura * who was enamored by the scenery of the coast line of Itsuura and loved the place as his final abode. There are some historic architectures such as Rokakudo ** designed by Tenshin and Tenshin Memorial Museum of Art. The owner of the house is a fisherman. His ancestor was a sailor attendant working near Tenshin. In those days, it was saying that Tenshin left a message "Fishermen do plant trees in mountains". The story of the project starts with planning to make full use of the site in the mountain inherited from his ancestor and design the house.

Tenshin Okakura * (also known as Okakura Kakuzo) was a Japanese scholar who contributed to the development of arts in Japan. Outside of Japan, he is mainly remembered today as the author of "The Book of Tea". Rokakudo ** is a hexagonal wooden retreat overlooking the Itsuura sea.

"V" makes full use of the land. Because of the south-facing steep site, to begin with evaluating to plan the site was very important issue. Not to develop the land, we set a rule to follow the shape of the current site condition and preserve the trees as possible as we can. At first to survey the mountain slope, second modeling the shape from data, and some flat surfaces were emerged and connected them. Points became lines and lines became surfaces, repeating these processes, we could finally find out the suitable location to plan to build the house, and it also makes full use of environment of the site.  The plan of the house looks like spreading shape of "V", and two wings are designed as different living environments.

The house consists of the simple materials; woods and glasses. To arrange the columns and lateral louvers regularly, and inlay wooden blocks diagonally in between them, the wooden frame wall acts as a bracing. Besides diagonal lines of wooden blocks, fixed glasses and partially awning windows are installed.

External wooden louvers are controlling the sunlight season by season. Irregular Sunlight filtering though trees comes into the room, from beyond the glimpse of the scenery, people inside of the house can feel the gentle change of four seasons.  The inside of the front door is the workshop fisherman's devices. The stairs lead to the upper level of working space.

Two bathtubs are prepared to fill them with two different temperatures to accustom fisherman's cold body after returning from the sea.

Wooden structure supported by the cone shaped "foundation stone" and bunch of log "posts". The site, near the sea of Itsuura and Tenshin's Rokkakudo, is located on a corner of the hillside natural "stylobate" which is a bedrock layer vertically protruded. Two different space of the house are cantilevered and heading to the valley side from the hillside at the back behind. At bottom ends and a cross point of the cantilevers, three of 3m high cone shaped "foundation stones" are installed to pured concrete (slump = 8cm) directly on the bedrock.

The bunch of log "post" are radiating out from the "foundation stones". 140mm-diameter "posts" are arranged in circularly double at the bottom and single at the top. The girders with 360 - 800mm depth are running between the "posts" and the slop of the hill. They are also creating the "floor" the people spending most of the time on it between the sea (valley) and the mountain (hill). Arranging finished 120mm-thick wooden blocks in diagonal position, the external wooden walls are acting as a bearing wall.

Protect the forest with local fishermen. A spring water from a rich forest will cultivate a life-bearing sea and will play a great role of a sea environment preservation. Follow Tenshin's precept "Fishermen do plant trees in mountains", we architects, the client and local Itsuura fishermen have planted about 60-trees in order to return the rest of the land to the mountain.

To doing this, we hope that it gives a fresh profit to surrounding area and environment, the family living the house generation by generation take good care of the forest and take Tenshin's precept over the next generation. At the time of future renovation of the house, they will use grown-up-60-trees and plant new trees again and again.

Note: This project was originally published on June 13, 2015 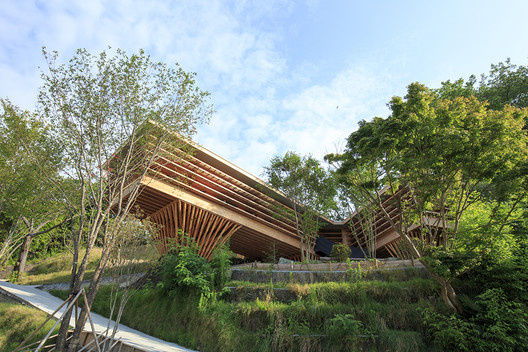