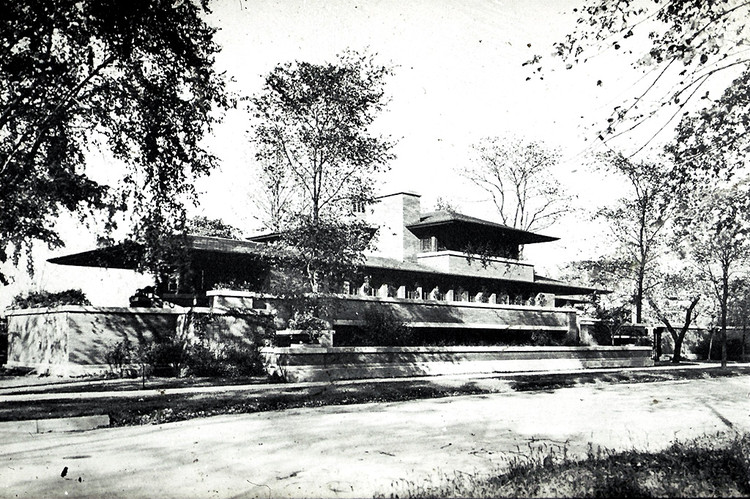 Text description provided by the architects. Designed and built between 1908-1910, the Robie House for client Frederick C. Robie  and his family was one of Wright's earlier projects. Influenced by the flat, expanisve prairie landscape of the American Midwest where he grew up, Wright's work redefined American housing with the Prairie style home.

According to Wright, "The prairie has a beauty of its own and we should recognize and accentuate this natural beauty, its quiet level. Hence, gently sloping roofs, low proportions, quiet sky lines, supressed heavy-set chimneys and sheltering overhangs, low terraces and out-reaching walls sequestering private gardens."More on the Robie House after the break.

The Robie House creates a clever arrangement of public and private spaces, slowly distancing itself from the street in a series of horizontal planes. By creating overlaps of the planes with this gesture, it allowed for interior space expanded towards the outdoors while still giving the space a level of enclosure.

This play on private spaces was requested by the client, where he insisted on the idea of "seeing his neighbors without being seen." Wright specifically approached this request with an enormous cantilever over the porch facing west that stretched outwards 10' feet from its nearest structural member and 21' from the closest masonry pier.

As is seen in many of Wright's project, the entrance of the house is not clearly distinguishable at first glance due to the fact that Wright believed the procession towards the house should involve a journey. Wright also expressed the importance of the hearth in a home with a fireplace that separated the living and dining room that is open to the ceiling above the mantelpiece for the billiard room and playroom.

The program of the house includes a living room, a dining room, a kitchen, a billiards room, four bedrooms, and a servant's wing which are defined while still flowing into one another.

The rooms were determined through a modular grid system which was given order with the 4' window mullions. Wright, however, did not use the standard window in his design, but instead used "light screens" which were composed of pieces of clear and colored glass, usually with representations of nature.

The purpose for these windows was to allow light into the house while still giving a sense of privacy. Wright also stated about the light screens, "Now the outside may come inside, and the inside may, and does, go outside." There are 174 art glass windows in the Robie House made of polished plate glass, cathedral glass, and copper-plated zinc cames, which are metal joints that hold the glass in place.

The protrusions of these windows on the East and West facade, along with low ceilings, emphasized the long axis of the house and directed views towards the outside. These windows were also stretched on French doors along the entire south wall on the main level, opening up to a balcony. The sun angles were calculated so perfectly with this cantilever that a midsummer noon's sun hits just the bottom of the entire facade while still allowing light to flood in to warm the house during the spring and autumn months.

The entire house is sheathed in Roman brick with yellow mortar, and only the overhangs and the floating brick balcony have steel beams for structural support. Using the horizontality of the brick, Wright added the finishing touches to the Robie House to create the ideal modern Prairie style home where he was able to build with the principles he believed in. The sweeping horizontal lines, extensive overhangs, warm well-lit interiors with furniture designed by Wright himself, and the balance of public and private spaces made the Robie House, in the words of Frederick C. Robie, "...the most ideal place in the world."