Candela graduated from the Madrid Superior Technical School of Architecture in 1935 before receiving a scholarship to study in Germany. However, his studies were short-lived as the Civil War in Spain broke out and Candela returned to join the forces fighting against Francisco Franco. Following the war, however, Candela was exiled to Mexico in 1939.

Ten years after arriving in Mexico, Candela founded the firm Cubiertas Ala, through which he constructed thin, reinforced-concrete shell structures that brought him international fame in the 1950s and 1960s. In 1961 Candela received the Auguste Perret prize.

After completing the Palacio de los Deportes in Mexico for the 1968 Summer Olympic Games, Candela decided to move to the United States where he underwent a profound professional and creative transformation, putting aside his engineering work and focusing increasingly on architecture, while also working full-time as a professor at the University of Illinois until 1978.

Candela carried out a vast number of projects, but perhaps the standout feature of many of his projects is the use of the hyperbolic paraboloid, a geometric shape that became a staple of Candela’s projects. Check out some of Candela's completed projects via the thumbnails below.

Share
Or
Copy
About this author
Katie Watkins
Author
••• 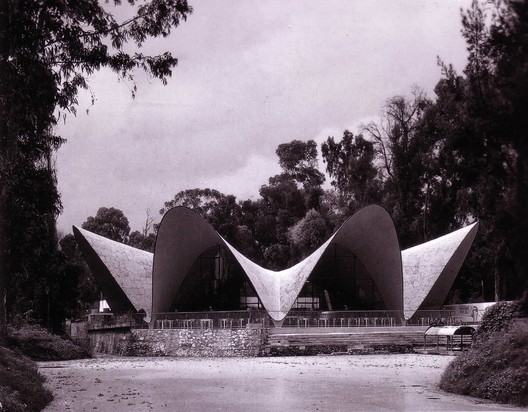