This article was originally published on November 25, 2014. To read the stories behind other celebrated architecture projects, visit our AD Classics section.

Architects have never enjoyed a position of such supreme prominence as they did in the worldview of Buckminster “Bucky” Fuller. To him, architects alone were capable of understanding and navigating the complex interrelationships of society, technology, and environment as viewed through the comprehensive paradigm of systems theory. Architecture, in this model, was intended to exist in close contact with both mankind and nature, playing civilization’s most critical role in elevating the state of humanity and promoting its responsible stewardship of the environment. Emerging from the ethical positivity of postwar modernism, this melioristic perspective marks perhaps the zenith of optimism’s ascent in mid-twentieth century thought, and gave Fuller a uniquely moral blueprint for his revolutionary designs.

It was from this social and philosophical context that Fuller conceived his design for the Montreal Biosphere, the United States’ pavilion for the 1967 World Exposition. For almost twenty years, Fuller had been perfecting his designs of geodesic domes, dotting the country with experimental golf ball-looking buildings and steadily cultivating his professional and popular notoriety. His obsession with this particular type of structure emerged from his interests in material efficiency, structural integrity, and modularity, the key ingredients of what he hoped would become a sustainable, easily replicable design intervention. Deploying these domes everywhere from restaurants to military facilities, the versatile structure became singularly associated with Fuller, as was humorously illustrated by a January 1964 cover of Time Magazine.

Of all of Fuller’s domes, the Biosphere is perhaps the most spectacular. At a diameter of seventy-six meters, the expansive sphere reaches an astounding sixty-two meters into the sky and thoroughly dominates the island on which it is located. The volume contained within it is so spacious that it comfortably fits a seven-story exhibition building featuring the various programmatic elements of the exhibit. Even amidst the Exposition’s other impressive attractions—including Frei Otto’s steel cabled German Pavilion and Moshe Safdie’s iconic Habitat 67—the Biosphere reigned supreme, attracting an event-high 5.3 million visitors within six months of its opening. [1]

Geometrically, the dome is an icosahedron, a 20-sided shape formed by the interspersion of pentagons into a hexagonal grid. However, the clarity of this form is obfuscated by the fragmentation of its faces, which are subdivided into a series of equilateral triangles with minor distortions that bow the individual planar sections into shells. As a result, the aggregate composition of the dome is substantially more spherical than simple icosahedra, while the smaller units create dazzling visual complexity through sheer repetitiousness. This lattice-type structure is created entirely of three-inch steel tubes, welded at the joints and thinning gently toward the top of the structure so as to optimally distribute forces throughout the system.

Originally sheathed in a thin acrylic membrane that was destroyed by fire in 1976, the dome as originally built was more opaque and visually solid than the version experienced today. However, its present structural nakedness, though unintended by the architect, creates a beautifully legible transparency that fully reveals the ingenuity of Fuller’s design. Standing outside the building, sightlines through the sphere penetrate the shell on two surfaces without material differentiation, resulting in a continuous reading of interior and exterior surfaces as facets of a single structural fabric curving in on itself. With the acrylic infill removed, the experiential emphasis of the dome shifts from spatial enclosure to the sensorial wonder of the structure itself. The unchoreographed visibility of the exhibition building within, however, is forgivably less appealing, at times resembling a disquietingly modern take on snowglobe kitsch at the grandest of scales.

As an architectural achievement, the Biosphere epitomizes Fuller's idealization of the promise of technology. Through holistic consideration, systemization and mass-production, he saw this project as an example of how architects could wield and deploy the instruments of innovation to create new species of hyper-efficient machines for the good of mankind. The beauty of the Biosphere’s pure geometries was an aesthetic bonus, the intentional but subordinate success of a functionalist and ethical pursuit. However, the capacity of the structure to communicate this message of optimism-through-optimization may have been lost on those who sought and struggled to find practical applications for Fuller’s invention. Although shell structures have endured as standard devices in the international architectural repertoire, geodesic domes in particular never achieved the mass-adoption Fuller hoped for, and his idealistic labors translated into few tangible gains for the human condition he sought to improve.

Unfortunately, Fuller’s uniquely hopeful philosophy about the power of the architect and the potential of technology was met with the same reception of intrigued skepticism that befell his dome. In response to the social upheavals of the late 1960s and the increasingly apparent failures of modernism, theorists in particular began to turn away from ethical positivism and humanism in general in their search for deeper meaning in architecture. Soon, with the widespread arrival of post-structural theory and its devolutions, the belief Fuller held in the primacy of an architectural moral imperative was all but abandoned by his peers. After the fire of 1976, the scarred Biosphere was abandoned and sealed off from the public, a tragic monument to a bygone era of hope and idealism.

In 1990, after nearly fifteen years of disuse, the Biosphere was purchased by the Canadian government and re-purposed as an environmental exhibition space, dedicated to promoting an understanding of the St. Lawrence River and the ecosystem of the Great Lakes. It was a fitting tribute to Fuller, who has been widely recognized as one of the first architects to bring the concept of sustainability into widespread use. The rebirth of the Biosphere also heralded the emergence of sustainability theory as a realignment of architectural thought with the worldly concerns that the academe had since discounted, validating Fuller's tireless advocacy of an architectural profession grounded in service to nature and humanity. 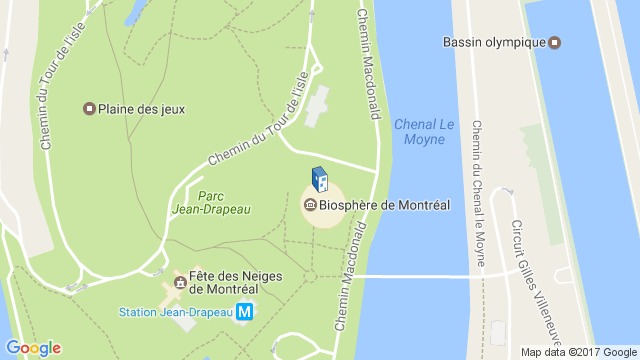 Location to be used only as a reference. It could indicate city/country but not exact address.
Share
Or
Copy
About this office
Buckminster Fuller
Office
••• 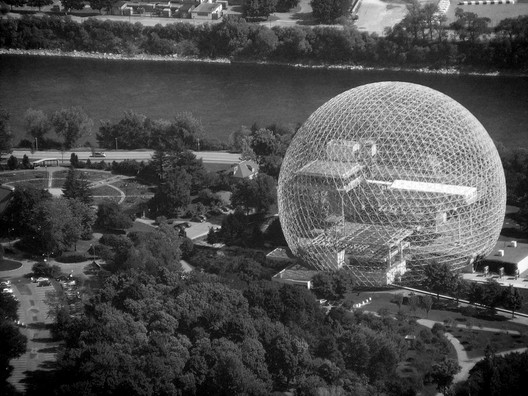