Text description provided by the architects. THE LOCATION & CLIENT'S BRIEF

This project is located at the palm coconut plantation, in Syah Alam district, 15 minutes ride from Kuala Lumpur.

The site where the building is located is part of the master plan of satellite city, which comprise of residential, and other supported facility, named Setia Eco Park.

The client’s brief is to create an unique, modern, sustainable architecture style without leave tropical aspects as a starting point.

The site itself was a part of master plan of integrated mixed use and residential function called SETIA ECO PARK, which carried the GREEN ENVIRONMENT concept, within their design concept, and intended to be sold to the midlle up market.

The design brief was came from client to create the housing environment which will reflects the modernity of asian architecture style without leaving the tropical aspects as design constraint.

Derive from the client’s brief, we decide to play an additive form generator to create a massing and, in the same time, functional space as well.

The indoor space was analogize in pure geometric box, which composed, juxtaposed and inter connected one and the other with a “gap” in between, which interpreted to a circulation or buffer zone, to infiltrate natural air and daylight, as much as possible.

In vertical way, the massing were rotated and juxtaposed perpendicular one and the other to create the in between space into roof garden.

With this roof garden, we try to create a rain water catchments surfaces to replace the ground which covered by the building.

Also giving an added value to the room at upper level, as a direct outdoor orientation from within.

This rotation of the massing also give a shadow effect to the room below.

The usage of few kind of texture and color to this building, also refer to the richness and diversity of aian architecture in general.

The usage of wide canopy in the top part of the building also play a double role, as a place for solar panel, beside as a canopy.

This amount of solar panel was calculated to reduce 30 % of energy consumed within this villa. 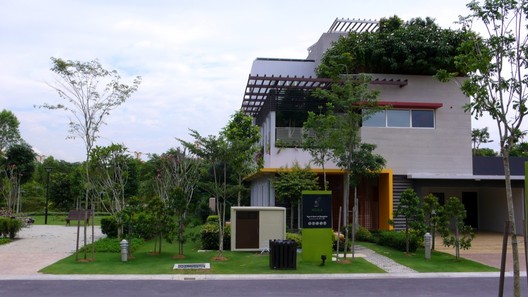