Danish architect Bjarke Ingels (born 2 October 1974) is often cited as one of the most inspirational architects of our time. At an age when many architects are just beginning to establish themselves in professional practice, Ingels has already won numerous competitions and achieved a level of critical acclaim (and fame) that is rare for new names in the industry. His work embodies a rare optimism that is simultaneously playful, practical, and immediately accessible.

Ingels was born in Copenhagen in 1974 and began studying architecture at the Royal Academy in 1993. Interested in becoming a cartoonist, he originally attended architecture school with the hope that it would improve his drawing skills. However, while studying he discovered his passion for architecture and went on to continue his studies at the Technica Superior de Arquitectura in Barcelona. After working for three years at OMA in Rotterdam and then co-founding PLOT Architects with Julien de Smedt in 2001, Ingels went on to found his current practice, Bjarke Ingels Group, in 2005. With offices in Copenhagen and New York, BIG has grown at an astonishing rate and has quickly established an international presence.

Much of his philosophy about architecture is revealed in his 2009 manifesto entitled Yes is More, which introduces 30 projects from his practice in the familiar format of a comic book. In a concept that he calls “Hedonistic Sustainability,” many of his projects seek to question how sustainability can be playfully and responsibly integrated into buildings to actually increase standards of living. In a quote that summarizes BIG’s approach to architecture, Ingels states:

Historically the field of architecture has been dominated by two opposing extremes. On one side an avant-garde full of crazy ideas. Originating from philosophy, mysticism or a fascination of the formal potential of computer visualizations they are often so detached from reality that they fail to become something other than eccentric curiosities. On the other side there are well-organized corporate consultants that build predictable and boring boxes of high standard. Architecture seems to be entrenched in two equally unfertile fronts: either naively utopian or petrifyingly pragmatic. We believe that there is a third way wedged in the no-mans-land between the diametrical opposites. Or in the small but very fertile overlap between the two. A pragmatic utopian architecture that takes on the creation of socially, economically and environmentally perfect places as a practical objective.

In practice, this approach manifests in a strictly diagrammatic approach to generating architectural form that is borrowed from his former mentor Rem Koolhaas—albeit a more highly developed and systematic incarnation of such an approach. "Whether post-rationalized or generative," writes Justin Fowler, "BIG’s diagrams project an attitude of inevitability, suggesting that the final form is the necessary result." This approach to generating architecture is a perfect complement to Ingels' highly developed powers of presentation, persuasion, and self-promotion that have drawn both ire and admiration from the architectural profession at large. Undoubtedly though, all of these factors have played a role in the success of Ingels and BIG.

Ingels has been involved in countless design competitions and some of his built projects include the Danish Pavilion, VM Houses, Danish National Maritime Museum, Mountain Dwellings, and many others. His architectural debut in North America was VIΛ 57 West, an apartment building at 57th Street in Manhattan along the West Side Highway. Completed in 2016, even when this building was still under construction, it garnered enough attention to significantly bolster BIG's reputation in the United States, leading to the firm being selected to design the tower at Two World Trade Center in 2015 (though its future remains uncertain).

2018 has already been a significant year for the Danish designer. It was announced in May that the architect had been named Chief Architect at WeWork, a position that will see his already major influence stretch even further. Additionally his 2016 Serpentine Pavilion was recently relocated to Toronto, where it will remain until November (at which point it will be permanently moved to Vancouver.) But it's not all been smooth sailing: BIG's proposal for the Smithsonian Museum came under fire by none other than the Fine Arts Commission.

Yes Is More: The BIG Philosophy

Bjarke Ingels Named One of TIME's 100 Most Influential People

Bjarke Ingels: "Denmark Has Become an Entire Country Made Out of LEGO®"

Bjarke Ingels' Advice for the Young: "It's Important to Care"

Bjarke Ingels: "The One Thing We All Share is Planet Earth"

Video: Bjarke Ingels on the Power of Architecture

Bjarke Ingels Talks Tech, Entrepreneurship and Modernism in this Podcast with Prehype

Check out some of BIG's projects through the thumbnails below, as well as ArchDaily's interviews, videos, and articles on the man himself below those: 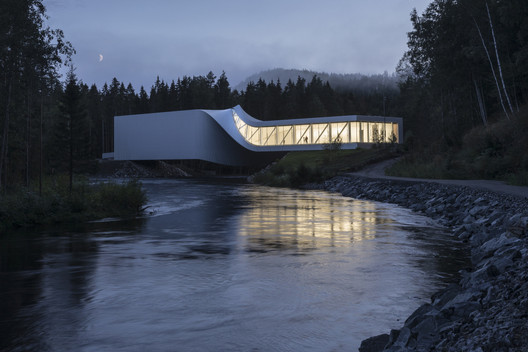