Text description provided by the architects. The former John Grant School, built in 1922, was renovated and enlarged in order to house Collège Saint-Louis, an International school, and respond to the growing needs of its students and faculty.  The building also includes new sports facilities, notably two double gyms and changing rooms, which were developed in partnership with the borough of Lachine.

A three-story, linear atrium, links the existing building and the new addition, allowing for the creation of an open and flexible space, while bringing the rear façade of the historic building into the interior of the new project.

This linear atrium thus becomes the heart of the institution, acting as a primary means of circulation as well as a focal point for student activities. The two principal entrances are located at either end of the atrium. An open staircase connects all three levels of the atrium; the staircase itself is crossed by strategically placed bridges, leading to a series of public and academic spaces. This concept lends itself to a compact volumetric arrangement, which allows for natural light to penetrate into the center of the building. In order to respond to specific technical and spatial programmatic needs, regular classes and offices are located in the existing building, while the spaces that require larger surface areas, such as: laboratories, gyms, library, and auditorium, are located in the new addition.

The new addition is a contemporary re-interpretation of the existing school: appropriating the scale, material palette, proportions, and rhythm of the original architectural vocabulary and transposing it into a transparent, welcoming, and dynamic new composition. This creates a new garden façade which opens onto what was once the back of the school. A dialogue is thus created with the exterior student courtyard, situated on the western part of the property, and visual and spatial links are established between the outdoor public spaces and the main indoor spaces, which are dispersed throughout the building, such as the student cafeteria, the atrium, and the library. The experience of this garden extends to the heart of the internal spaces of the building, through the atrium and as far as the existing building.

The different public spaces of the program, such as the cafeteria and the student agora, are arranged with direct contact to both the atrium and the exterior spaces, which include the outdoor playing fields and other adjoining areas.

The project was completed in two separate construction lots, the first lot comprising of asbestos abatement and the demolition of the interior of the existing building. The second lot encompassed the remainder of the work, which included the structural rehabilitation and improvement of the original building, as well as the construction of the new addition. 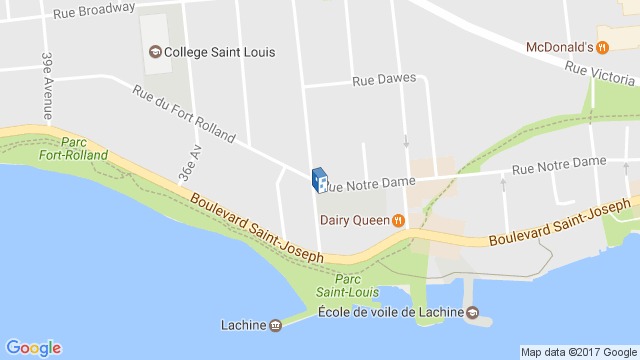