Text description provided by the architects. The project is a medium complexity hospital located south of the city of Cordoba, in the populous Villa el Libertador neighborhood. The building responds to a need for health services for a vast section of the lower-middle class population. The project is expressed as a "mono-material box" of exposed brick [a material that is very characteristic of the city, popularized with the projects built by the architect "Togo" Diaz] that envelopes a separate reinforced concrete structure under which are all the activities that meet the requirements of the medical specialties addressed in the program.

The work is located in a residential neighborhood of the city that is characterized by a consolidated urban fabric, with houses one and two floors high, with a regular to precarious level of construction. Responding to the horizontality of the neighborhood fabric, we propose a one-story building with a double height facade in the public sector which gives it hierarchy. It is on a flat site with its main entrance to the north. The lot is large in relation to the proposed program, this allows for a private street surrounding the building that separates it from the neighborhood fabric, highlighting it from the environment. In this sense, to strengthen the institutional character of the building, the project is setback from the facade, generating a large public space at the neighborhood level which in turn gives hierarchy to the main facade and allows a full view of the Hospital.

The use of brick in this project has some simply practical aspects, such as the maintenance of public works, and others that refer to a continuing investigation of the material. Its use is part of an exhaustive search we have been doing in all areas of our professional career, both in university through exercises between students and teachers in which we manipulated, weighed, stuck and interlocked the material, learning its possibilities.

In this project, the facade appears as a large "brick screen at a modified scale" which oriented northward works as a parasol. This is not the result of a random idea but part of our relentless quest to use available resources and take advantage of the structural and expressive qualities of the material, a process that will no doubt continue in another project.

We want to reinvent this ancient material which we can access easily, and find answers and possibilities in it for a contemporary architecture. Beyond its usual uses, I believe that this search is not just ours, but of great Latin American architects such as Solano Benitez and Javier Corvalán. It is a contribution and a demystification of the idea that a building of this complexity needs any type of high-tech envelopes, especially in our latitudes where there are excellent craftsmen in this trade.

Using brick as the main material not only connects the complex with the Cordoba architectural tradition, but also improves the thermal conditions inside and minimizes maintenance. The technology allows us to use local labor, which makes the project an employment generator. According to the orientations, we apply parasols of this same material that provide the necessary protection and lighting. This material has a very good behavior for the climate of the city, which has broad temperature changes.

Light has been another issue that has always interested us, making it enter spaces indirectly, creating atmospheres, or directly as "matter" that continually modifies space, or by combining these two resources. In order to approach a humanization of health care, the proposed distribution of spaces allows the vast majority of premises to have natural lighting and ventilation, seeking to provide environmental quality and resource optimization. In the intensive therapy area, the work with natural light is not just an architectural device but has a therapeutic connotation. Therefore we designed three skylights that ensure the perception of the path of the sun throughout the day. In the public waiting area, we combine a large space, which is divided by the interior courtyards, where the light was used as an organizer, placing skylights at the ends of the courtyards, organizing the different waiting rooms in the public wing of the hospital almost like signage, offering different simultaneous perception scales through the designed transparencies.

The layout is organized with a functional optimization criteria, on one floor, looking for easy accessibility and connectivity between different areas and services of the Hospital. The organization scheme proposes a gradual transition between public access spaces, semi-public and technical in relation to the main entrance. We thus organize three successive bands of increasing control and restriction with respect to public access. The main circulations are designed in the shape of a "comb" so as not to cause interferences, dividing clearly between public and technical with open ends for future growth, without interfering with the operation of the center. The design adopted reconciles the opportunities of the site in terms of accessibility and orientation, with the functional program, seeking clarity in the program, differentiating public areas, areas of technical services, and support. The proposed scheme aims to achieve functional clarity to facilitate user orientation. Users enter through the access area that connects the hall with the waiting areas and the corridors that lead to surgeries, laboratory, hospitalization rooms, etc. This clear differentiation generates a particular image for the public and waiting area; with emphasis on the use of natural light through skylights and courtyards. These skylights reduce the need for artificial lighting. 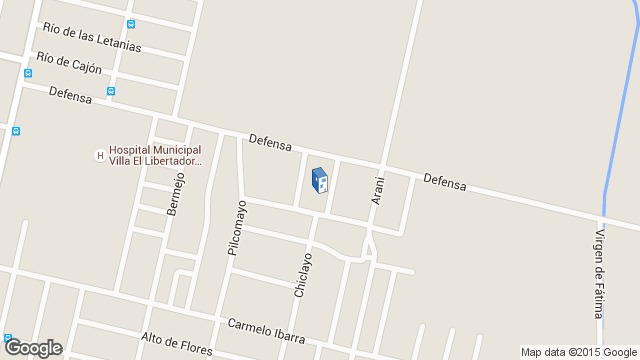 Location to be used only as a reference. It could indicate city/country but not exact address.
Share
Or
Copy
About this office
Santiago Viale
Office
•••
Ian Dutari
Office
•••
Alejandro Paz
Office
•••