Text description provided by the architects. Keenly awaited by the town's people, the Quinconces cultural complex, designed by Éric Babin and Jean-François Renaud has occupied an important place in the cultural and social life of Le Mans ever since its opening.

It stands as an interface between the tree-lined Esplanade des Quinconces that is the venue every year for several flagship events (weigh-in for the Le Mans 24-hour race, the 25e Heures du Livre and a fun fair) and Place des Jacobins which is the site three times a week of a very busy outdoor market. Located below the apse of Saint-Julien Cathedral, it stands across from the law courts that were built in the 1980s and a group of residential buildings with ground-floor businesses and the Palais des Comtes du Maine, now used as the city hall.

A SOCIAL AND URBAN CONDENSER

In this already rich location of architectural heritage, the new building asserts its modernity without being overly monumental or ostentatious. Incorporated into the geometrics of the city center and the existing dimensions, it presents two spare, well-defined volumes under a single roof which is defined horizontality like a sharp knife.

The municipal theater, a blue-ribbon building if ever there was one, stands on the right, encased in a vertically striated glass curtain.

On the left, clad in handsome white stone, stands the visible part of the cinema multiplex.

A little withdrawn, the multiplex is fronted by a stone plaza looking towards the cathedral, which is framed perpendicularly between the two facilities. Before and after each live performance or movie, this sheltered space is filled with spectators and pedestrians, milling about in a constant ballet.

This new and very busy public space gives onto a wide wooden terrace that hovers above the Esplanade des Quinconces on a level with the foliage of the linden trees.

One enters the theater's foyer directly from the plaza, then climbs a floor to the vast hall that enjoys an exceptional, unhindered view of the Place des Jacobins and the cathedral. The theater itself is covered by a lathing of light-colored wood on the outside and lined on the inside by darker over-lapping wood. It is scalable and contains a balcony and can seat 830 people in excellent viewing and listening conditions. It is multi-purpose and can be used for plays, dance performances, lyrical art and opera. The dressing rooms are located behind the stage on several levels while under the plaza are located a performers' foyer that opens onto a landscaped patio.

A rehearsal room is opposite under the terrace overlooking the Esplanade des Quinconces. It can be opened to the public as well as stage performances. An exhibition gallery and meeting room are also included in the same volume, the latter of which opens onto a second tree-lined patio. These three spaces open onto the Esplanade des Quinconces through big pivoting shutters and can be operated individually or in unison.

Opposite the municipal theater is a complex housing 11 movie theaters. From afar it looks like an opaque block levitating three meters over the ground. The entrance is on the plaza where there is also an entirely glassed-in café-restaurant.

Audiences go down to the ticket windows and movie theaters on the lower level. Three of them are hanging and are accessed by escalators; the eight others are underground and connected by an inner corridor.

In many ways the new architectural and urban complex designed by Eric Babin and Jean-François Renaud – l'Espace Culturel des Quinconces – Is as intricate in its functions as it is limpid in its expression. It is both a precision tool serving an ambitious cultural policy and a much heralded venue by the people of Le Mans for their festivities and civic life.

Eric Babin and Jean-François Renaud are calmly, and to date unobtrusively, following a singular pathway, delivering rigorous and engaged products freed from the tyranny of fashion.

They founded their agency nearly twenty years ago after winning a European-wide competition that enabled them to deliver a hundred-unit housing project in Rheims.

Since then they have developed an architectural style that is as grounded in context as it is abstract and theoretical. Holding dear to the concept that a building should occupy a proper place in its setting and perfecting new architectural types derived from analyzing each program, Babin + Renaud carry out projects of scale with highly varied remits, e.g. housing, of course, in complex social fabrics on the edges of Paris (Saint-Denis, Saint-Ouen), on symbolically significant sites such as Paris' Les Batignolles or up-and-coming sites like at the Porte de Montmartre. They also tackle mixed projects, office buildings or extensive public facilities like the Quinconces cultural center that the agency has just delivered in Le Mans.

Now ensconced in the heart of Paris' 11th arrondissement, the agency employs some twenty collaborators and has projects throughout France. For the past several years Éric Babin and Jean-François Renaud have also been teaching, initially in Lille, Marseilles and Nantes, now in Rouen and Paris' Belleville respectively. 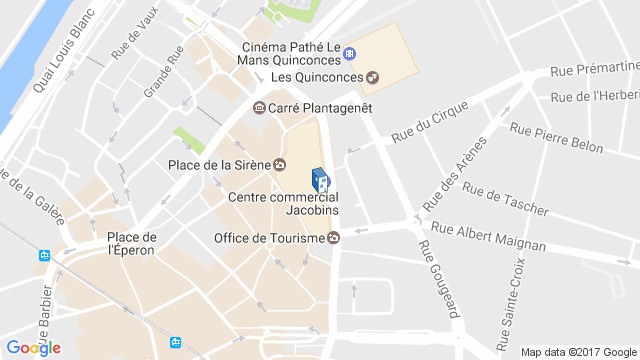