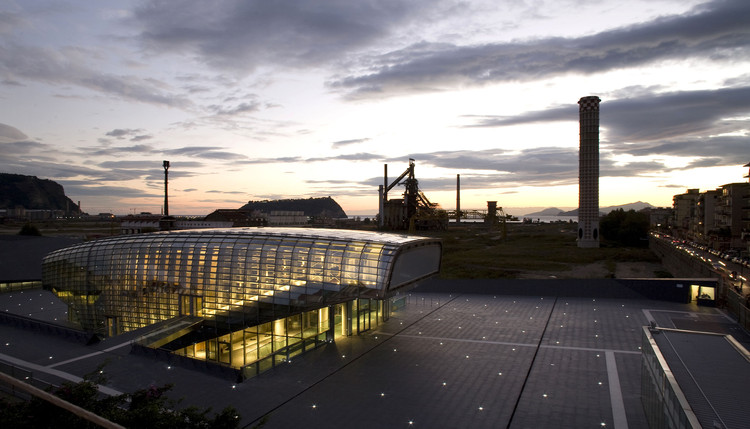 Text description provided by the architects. The project is located on the site of an abandoned steel factory, which had been created following World War II to help with the reconstruction of the Mezzogiorno region of Southern Italy. Following the plant’s closing, it was decided that the site should retain the concept of “reconstruction,” but this time on a local level. Thus, the idea for a cultural center for local residents and tourists came about.

The complex is intended to be the entryway for the larger Bagnoli Futura initiative, which aims to regenerate the entirety of the former industrial zone. As a result, the majority of its functions hug the ground, creating a large open-air public space that is clad in stone. This datum allows the auditorium element to be the defining element of the project, its glass-clad structure rising from the foundation like a futuristic vessel. By day, the glazing system’s mirrored, greenish tint allows for the building to reflect its residential neighborhood back on itself, while at night the volume glows from within, becoming a lighthouse-like element on the somewhat scarred landscape.

Inside, the complex houses exhibition spaces, the central auditorium that seats 300, a bar, and reception areas. Support facilities such as storage space, delivery zones, and mechanical rooms are located under the plaza level. The interior of the auditorium affords spectators with a clear view of presentations, ceremonies, or screenings, thanks to the steel structural system’s integration with the glazing. The layered effect of the façade helps diffuse direct sunlight entering the interior. Also housed within this assembly are opaque acoustical curtains which unroll along the length of the façade’s interior, giving facility operators the ability to adjust the acoustics and lighting features according to room usage.

A second structure, which can be seen more as an extension of the public plaza, will house a fitness and wellness center. Its sloped facades contain 960 integrated photovoltaic cells (spread over 1,420 m²), which once fully- operational, will be capable of producing up to 265,000 kW per year. This complex is accessible via a smaller domed structure (a sort of “cupola” – a subtle hint at the nearby Roman ruins of the Temple of Diane), which along with the auditorium space, becomes a glowing element at night. Visitors the fitness center and wellness center will have access to additional amenities such as a restaurant, business center, and game rooms, in addition to the requisite programmatic elements (spas, wading pools, fitness classrooms, locker rooms, etc.). 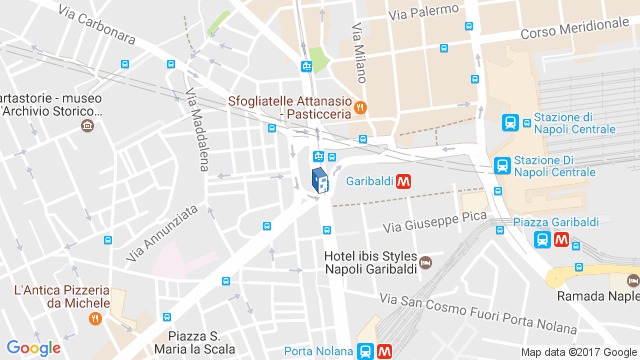 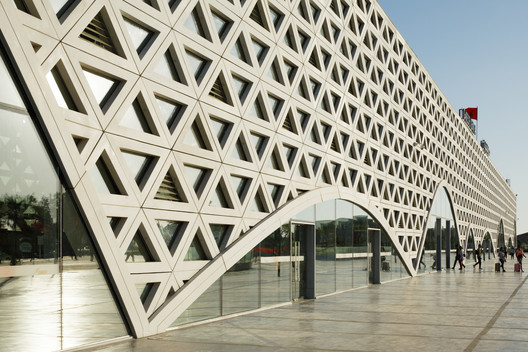